By Holiblog Contributor in Uncategorized on March 19, 2018

Woke slightly earlier today so I decided to get up anyway and prep for the day.

After the almighty down pour last night everything is now calm. Not a breath of wind and a flat sea. 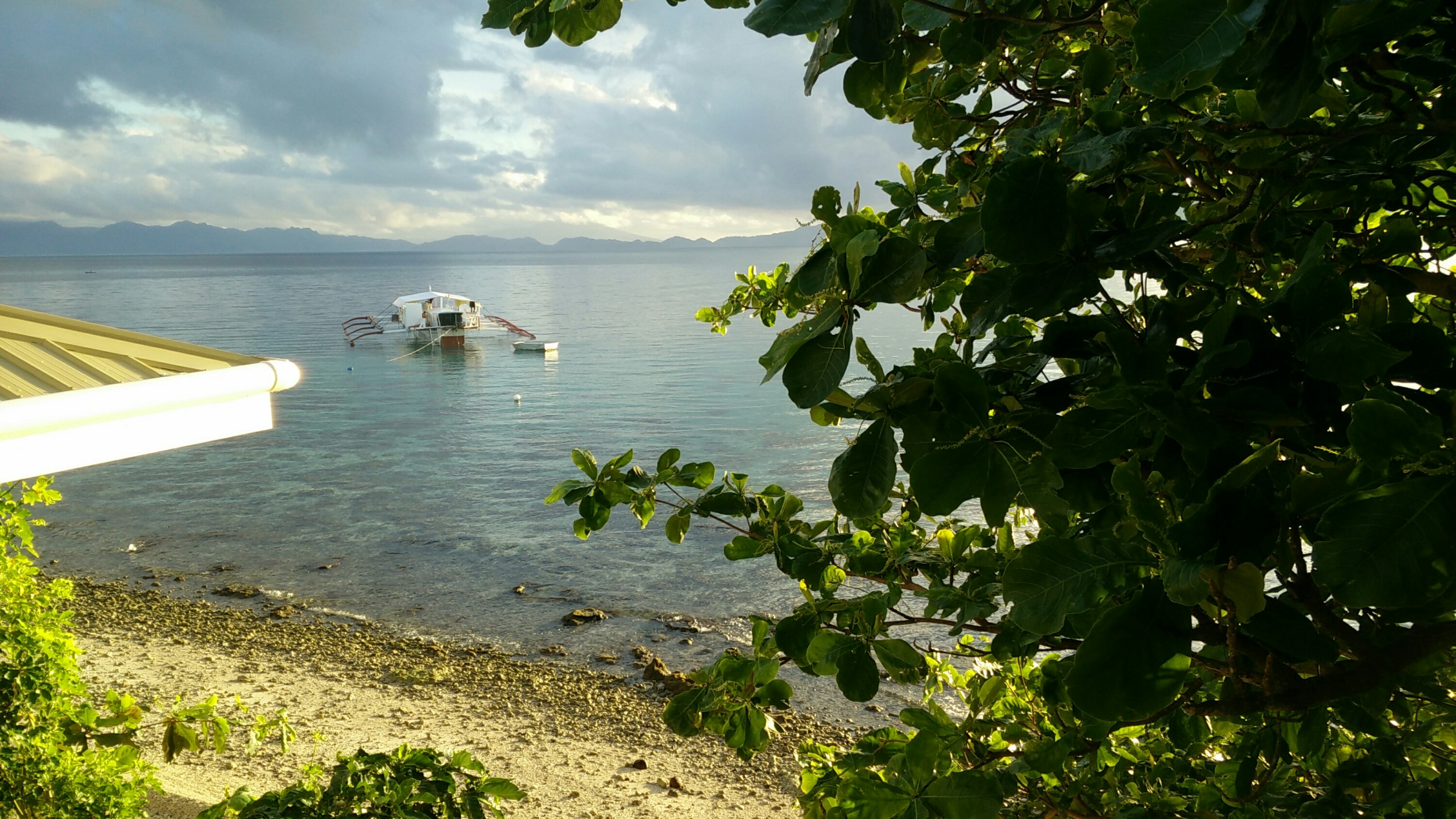 The team were on the boat just after five to fix the clutch, clutch mechanism or whatever it was that broke yesterday. Perhaps the lack of frenzied shouting suggests that all is now well, time will tell. 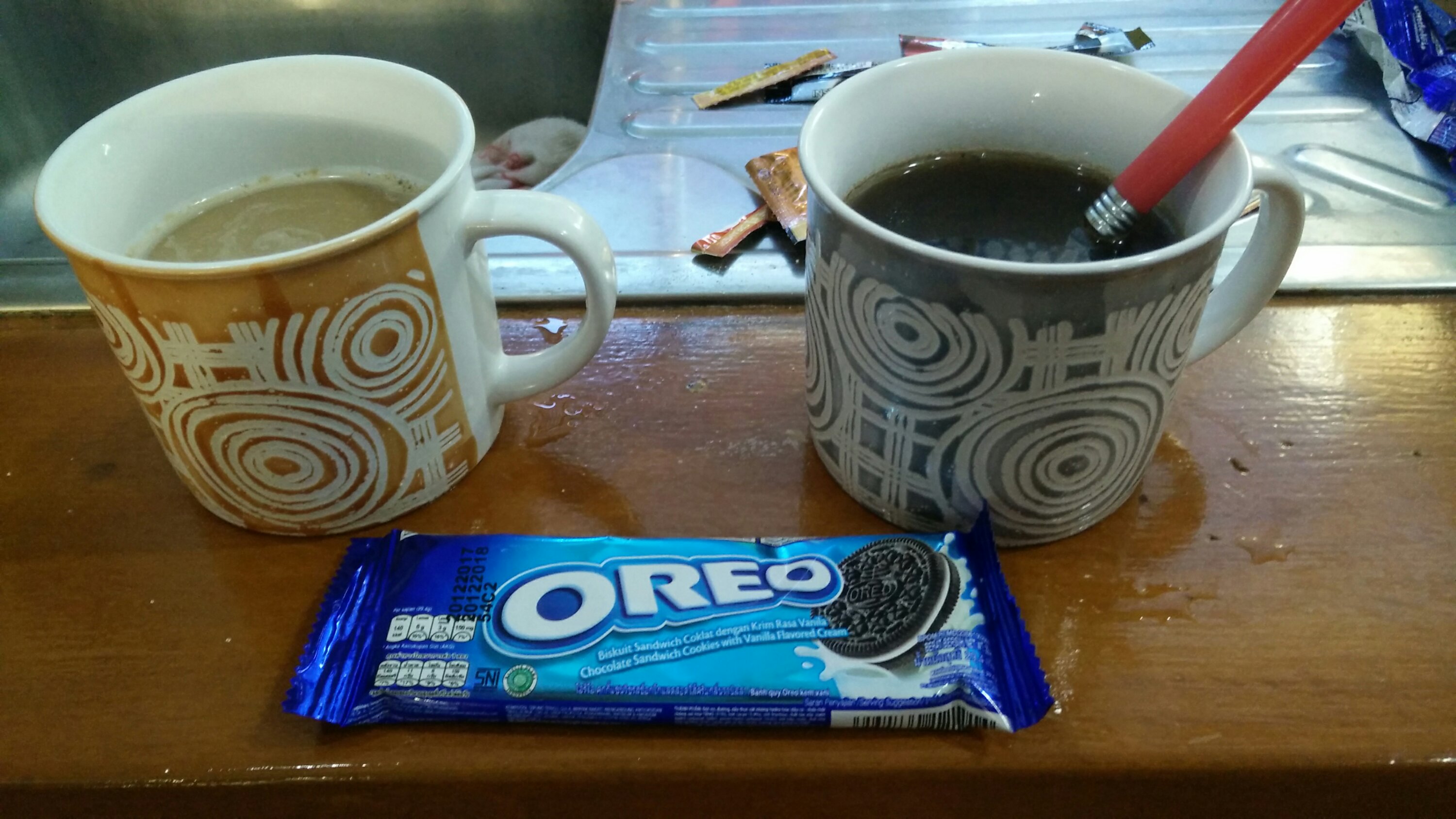 Today we are trukin’ off to Little Lembeh, transport courtesy of Isuzu. A well appointed vehicle with fully adjustable seating in the rear. Journey time could be up to 20 minutes so we might as well be comfortable!

Well that is not how it turned out. When it was time to go the Isuzu megatruck had been replaced by the small flat back micro wagon and trailer. We load the trailer and climb on board. 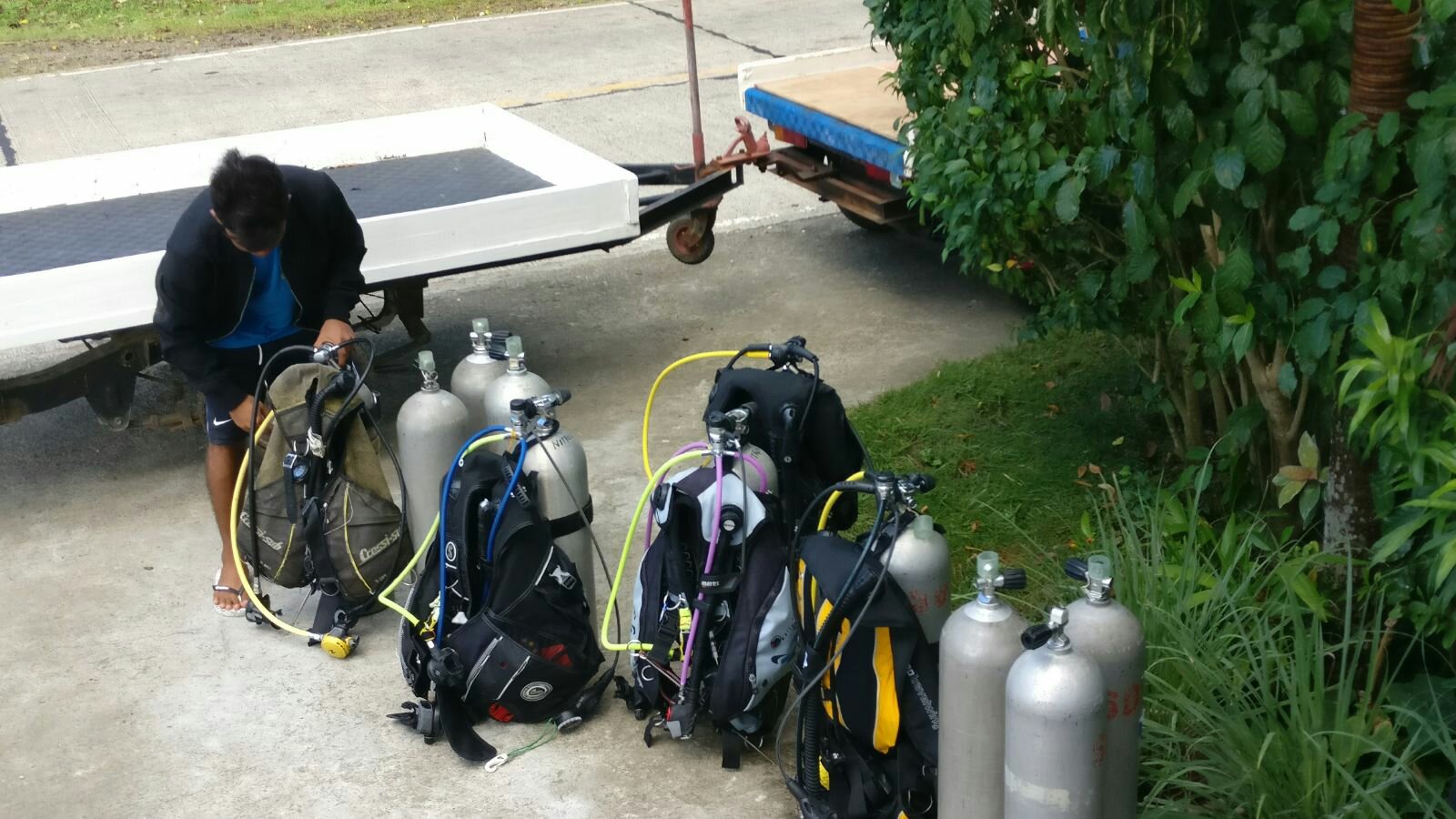 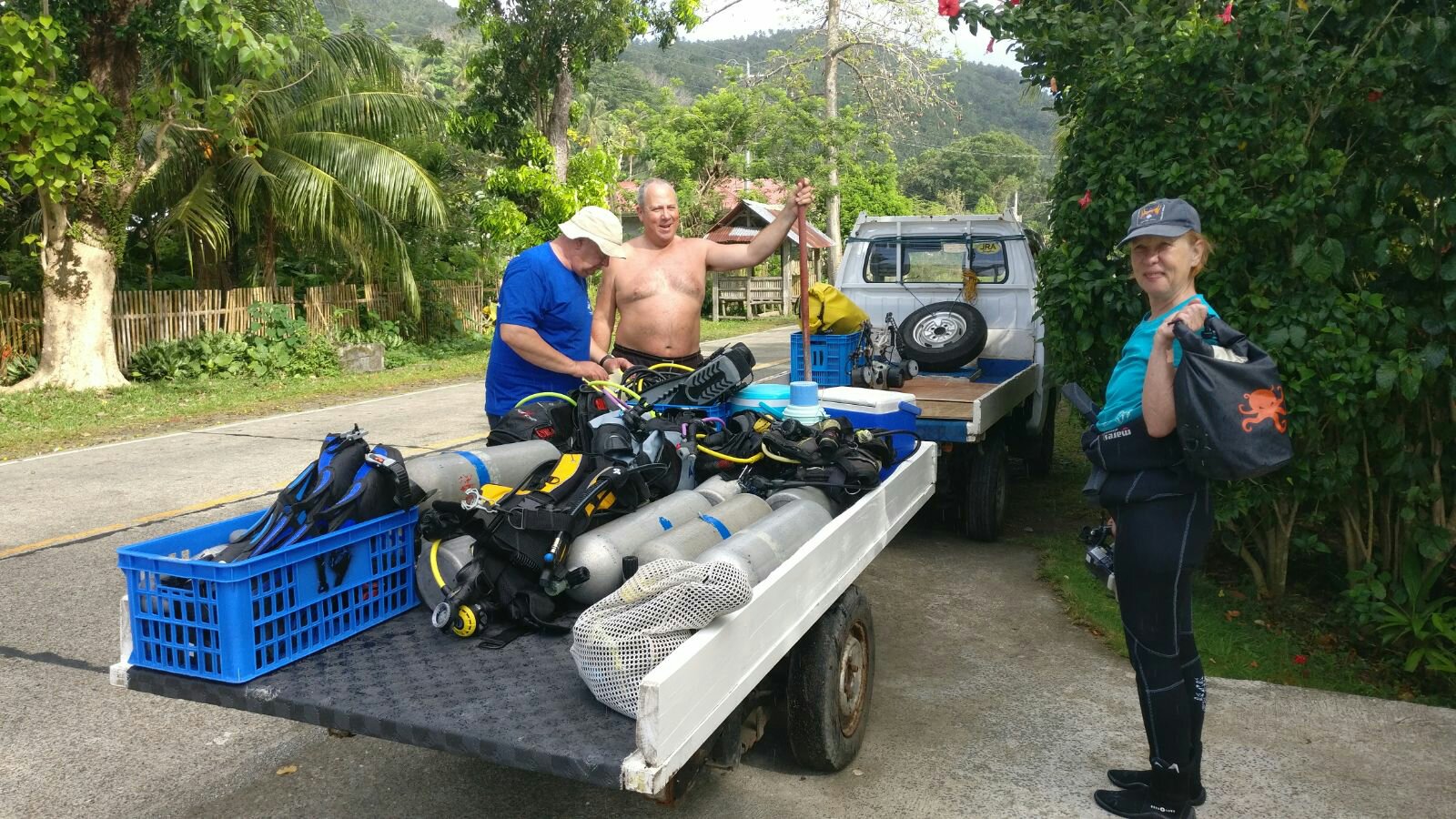 It don’t start! After many attempts it is decided that a different vehicle is required. Ten minutes later we are all loaded up and headed towards Little Lembeh. 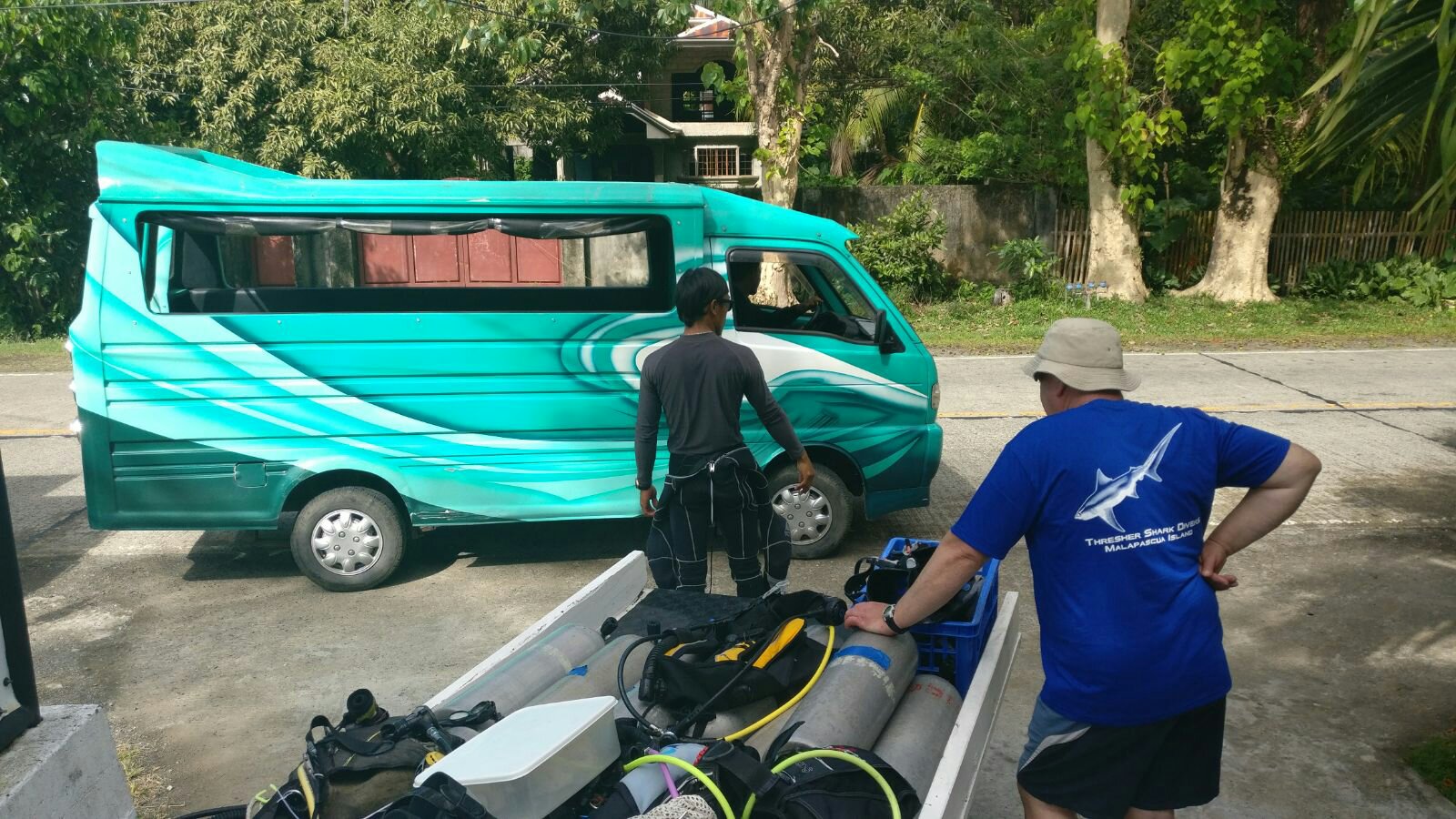 The trip takes about twenty minutes and there is plenty to see along the way. The village (more like a town) is called Malitbog, our right hand man pays the required fees at some office then we head off for the diving.

We unload and kit up about twenty metres from the waters edge. It’s super flat calm and no current so in we go for what turns out to be a great muck dive.

When we surface at the end of the dive it is raining. We get out for a cylinder change along with coffee, biscuits and fruit whilst the surface interval plays out. 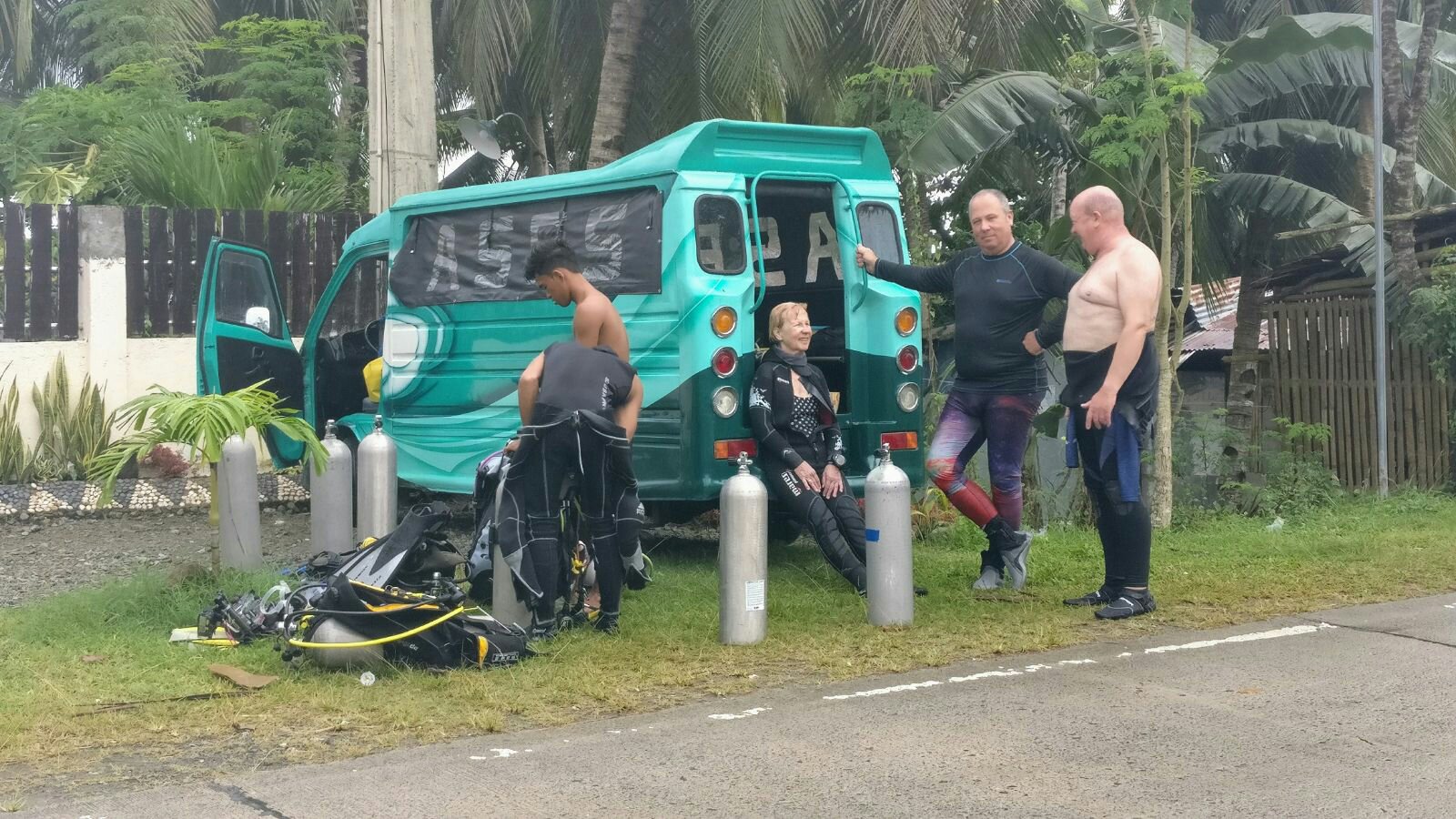 The rain dries up and the sun comes out for the second dive which was equally spectacular.

When we get out the sun is shining even more brightly.

The van is loaded and we head south back to base where we take the usual lunch whilst watching the sunshine and flat sea! 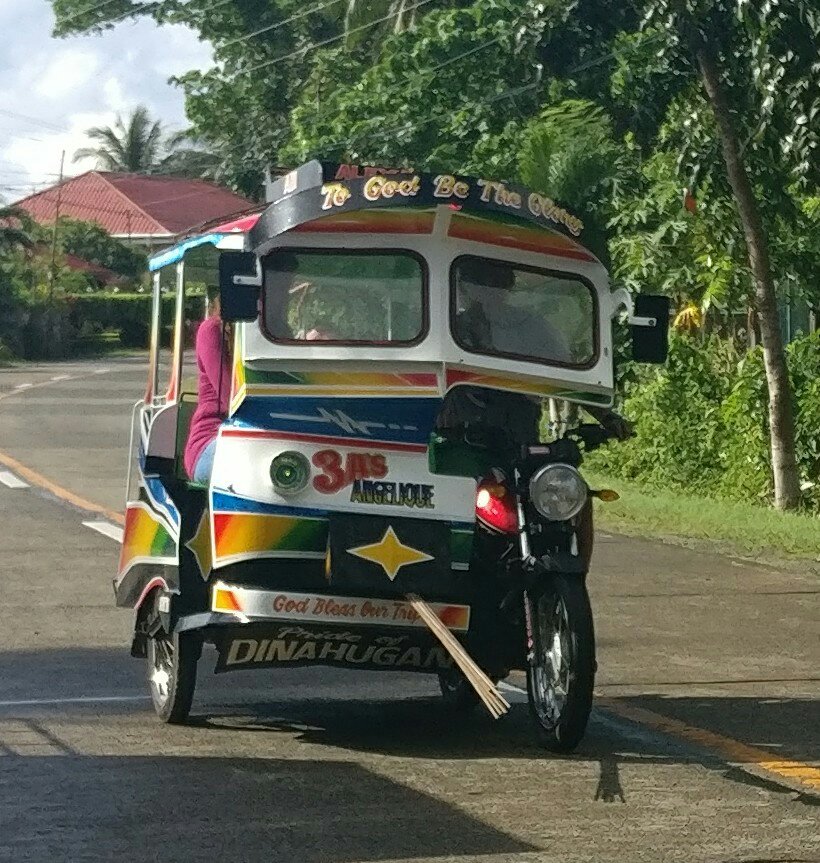 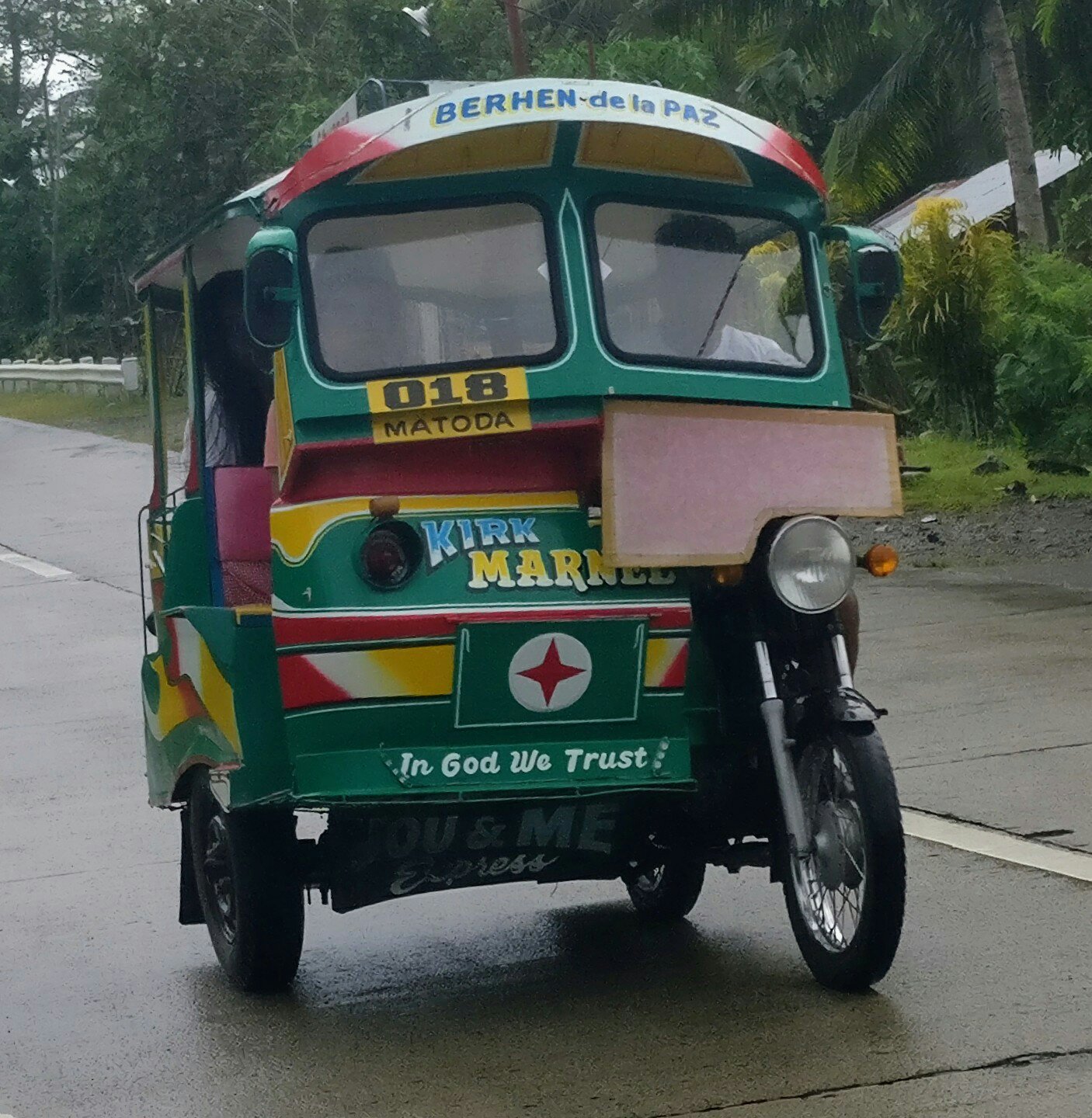 In the PM we do a shore dive with Dave which was really nice, the water is warmer and clearer than of late and we go a slightly different route taking us to new coral outcrops and sandy areas. We go set for macro photography but during the dive we encountered a group of about six sweetlips and they were mahoosive do we day and watched them for a while whilst they did pretty much nothing apart from watching us! There were also a few giant trevally cruising around and occasionally picking off the more absent minded smaller fish.

Many of the larger pinnacles were teeming with small Fry as well as the relatively larger Anthias. At one point all I could see was a mass of tiny fish in all directions. I suspect that each of these outcrops also had a resident lion fish keeping a firm grip on population control.

There were still a few jellyfish in the water, one of which got Dave on the lip just before the end of the dive, much swelling ensued.

Back on land we note that the boat had returned from another successful whale shark trip. This time Pedro had the gear lever in his hand. After helpful comments like ‘what have you broken this time?’ He assures us that he is performing preventative maintenance and that all is still well with the new engine.

Just to recap, not only is the boat new to the dive center but the engine (Mitsubishi) is new to the boat and as well as being an instructor and guide, Pedro is a properly qualified diesel engine mechanic. He fitted the new engine to the boat the week before we arrived.

From what I can tell, that means fixing it to the hull and then connecting the clutch and gear controls in a relatively ingenious/Heath Robinson/Philipino style. The cooling being provided by a series of pipes fixed to the outside of the hull below the waterline. The ships wheel (also from a truck) has an oversized bobbin on the end around which ropes that ultimately lead to a rudder are attached. Further questioning revealed that it runs best in third gear though the lower gears are available for going up hill and the higher gears for economy on a longer run.

Dinner consists of the near compulsory Lumpia (meat filled spring rolls) followed this evening by vegetable and fish curry’s and garlic rice.

I feel that a return to the sweet and sour chicken will be on the cards for our last meal there. We plan to do a night dive under Padre Burgos pier tomorrow so back to A&J’s on Thursday.

A couple recently arrived from Spain, they were going on yesterday’s whale shark trip. We advised them to do what we noticed some of the guests did when we went. Immediately after jumping in, they summoned one of the spotter canoes to pick them up and head straight for the shark. The Spaniards did this and had very close encounters.

It was lovely to hear that our advice worked well for them. They were so excited to tell us about their encounters.

This happened the other day too, a Danish Lady doing her last dive of the trip wanted to see a Seahorse. It was to be her 10th dive (I had to do 100’s before I could see a Seahorse!). Sure enough, during the dive at Little Lembeh, we find the required item and drag her over for a look. She was so happy.