By Holiblog Contributor in Uncategorized on June 2, 2019

Well, here we are, our first dive day, ignoring the extra one yesterday afternoon. We are well rested. We both slept nine hours, 9-6.

Coffee and Oreos in bed and now contemplating getting up of breakfast.

The room is lovely, plenty of space and storage. Most important, comfy bed.

There are 13 divers here at the moment, however, only 5 out on the boat. Eight divers are doing the PADI Dive master qualification, via Open water, advanced open water and rescue Diver. This is done over two, two week holidays. Very different to the BSAC way.

A couple of things that happened on the ferry yesterday, that Richard didn’t mention. First was that I went in search of the toilet, which, with help, I found, on the outside of the ferry in the heat. So far so good. The problem was that I found getting out of the toilet a bit a challenge. Two locks to confuse me. A very small door knob, very close to the edge of the door meant I couldn’t get my large hands around it to open it. This was followed by some banging and shouting, some more banging and shouting. Nothing! No one to help! For one, who doesn’t like enclosed spaces this is my nightmare. More knob wobbling and lock twisting and I was free!!!!!! Luckily, no-one around to see my complete mortification!!!!

Can you imagine…? Philippines National News….Ridiculous, stupid British women gets stuck in loo on ferry…

Second, our ferry was going to a port that we hadn’t been to before, Hilongos. Once that we docked, I heard someone say “Hello Jo”. It was Darlene, Mrs Phil, from the dive centre. She said that she had spotted me, from way off. She was coming back from a few days in Cebu with the family. I was a little shocked that I had been spotted, after all, Richard is generally more noticeable than me, and he was wearing a particularly noticeable T-Shirt. However, it appears that here in the Philippines, tall (that’s Philippines tall, not UK tall), pale and paisty, and blond sticks out like a sore thumb.

This leads me on to the subject of soreness. Bashed my toe yesterday. It hurt, blood from under the nail and around the sides. Quite a lot! However, putting pressure, and tissue, on the ‘wound’ has made it all better this morning. Thank goodness. See I was paying attention, when I didn’t manage to save Keefe after he had his leg chopped off in a training exercise at Vobster Quay.

Having read Richard’s blog from yesterday, I notice that he had forgotten to mention the crib score, possibly because he doesn’t remember playing the last game, and I don’t really like to mention it as I am currently loosing 1-2. Plenty of time to rectify this!

On to the diving… On Kermit.

One of Richard’s favourites.

Slope with coral and some sand. Down to about 30 metres, where there is a beautiful overhang with soft corals.

An hour surface interval, coffee, biscuits and pomelo, never had pomelo before, looks like a grapefruit but not sour.

A wall dive that drops to about 26m followed by a coral slope. Gentle current, which we swam against and then drifted back with.

Chose well, Thai fishcake in a bun with salad and pineapple accompanied by herby chips. Hold the herbs next time. 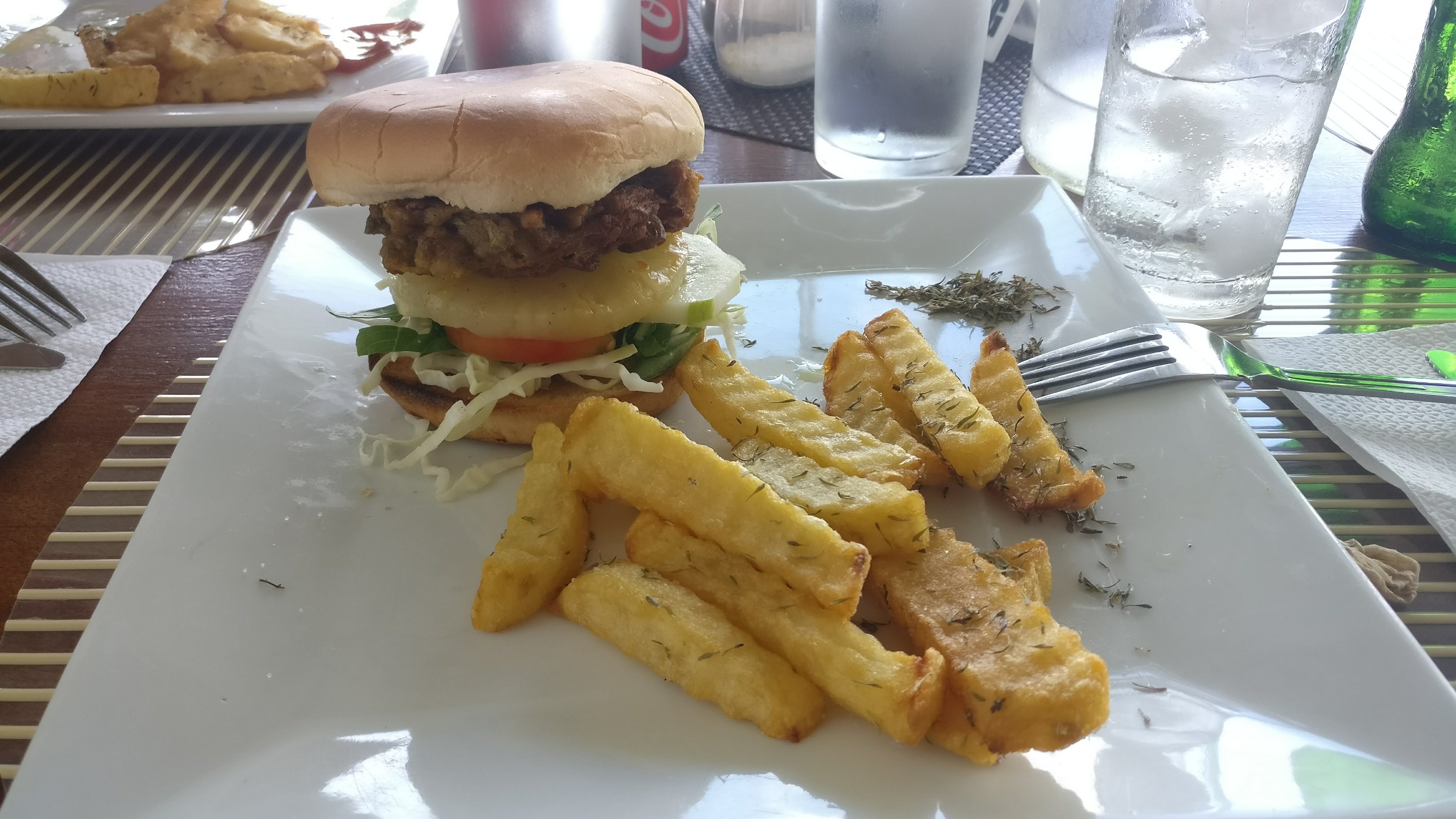 We found the current fish on this dive, so we just went with it. Not my favourite type of diving as it really makes it tough to take photos.This was the site next to dive #2. I think they were hoping that we would see a whale shark. We didn’t.

We have got the photos off the camera and now sitting down for a drink and a rematch of crib…Sitting on the veranda, enjoying the ‘sun set’. 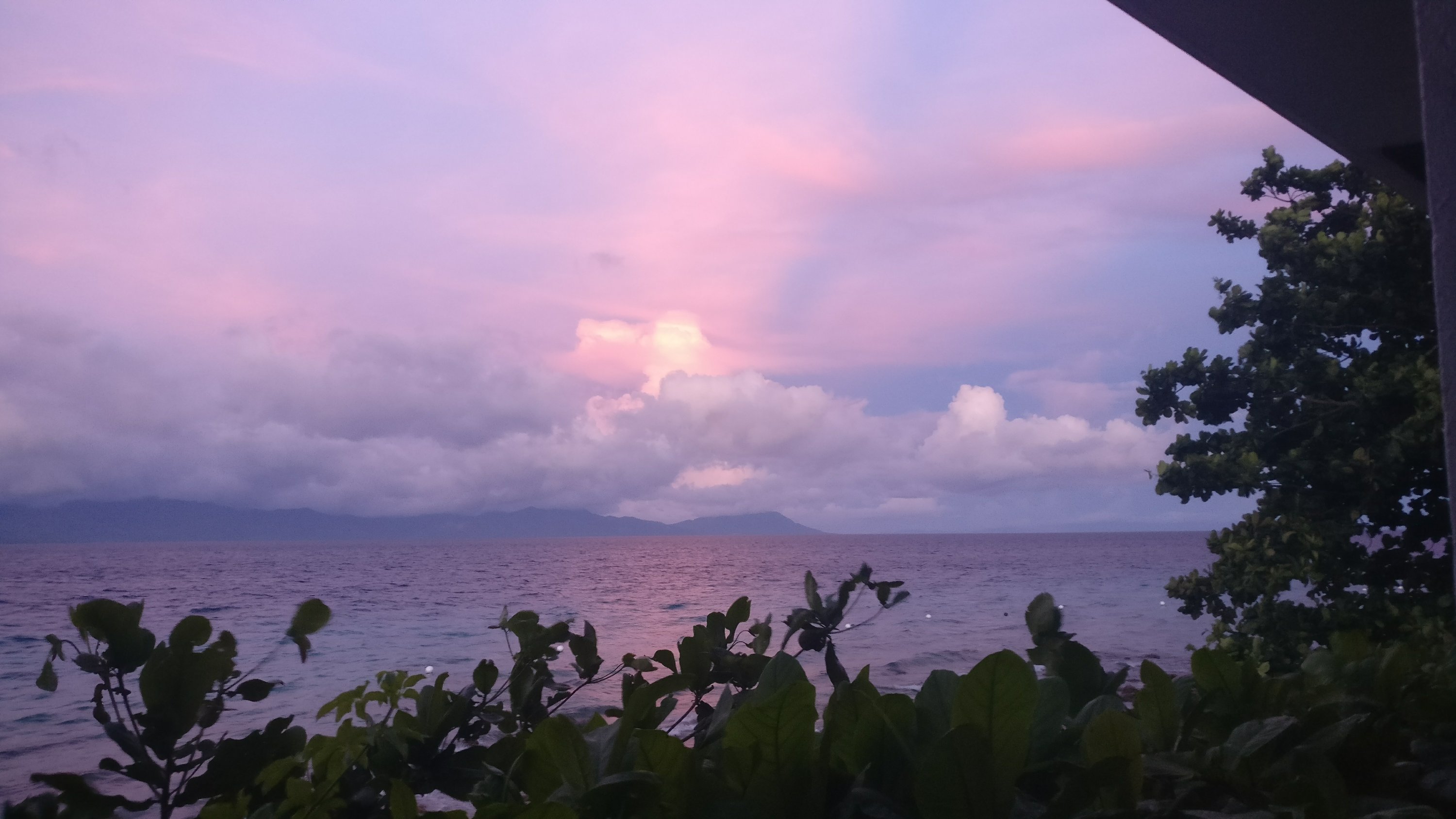 As we are facing east, this a purely a reflection of the sun on the clouds.

I have just won at crib, yay… Two all.