By Holiblog Contributor in Uncategorized on June 13, 2019

Cameras all prepared and checked, double checked today and spare battery packed.We got woken at about 4am by the most amazing downpour though not a drop off wind, how tropical! It sounded a bit like standing under a waterfall but not so quiet. 🌧️💧☔I am thinking pancakes today, a change from the usual 🍳&🥓, it’s still early and not much else has happened so I have to revert to talking about food.Today’s dives are planned to be over at Napantao in the MPA. This placed is always teeming with thousands of fish, bright orange Anthias and purple Anthias as well as some grey similar looking fish (are they also Anthias? Post will be updated when the answer arrives).Yep, pancakes it was, sorry no picture, please refer to picture in earlier post. 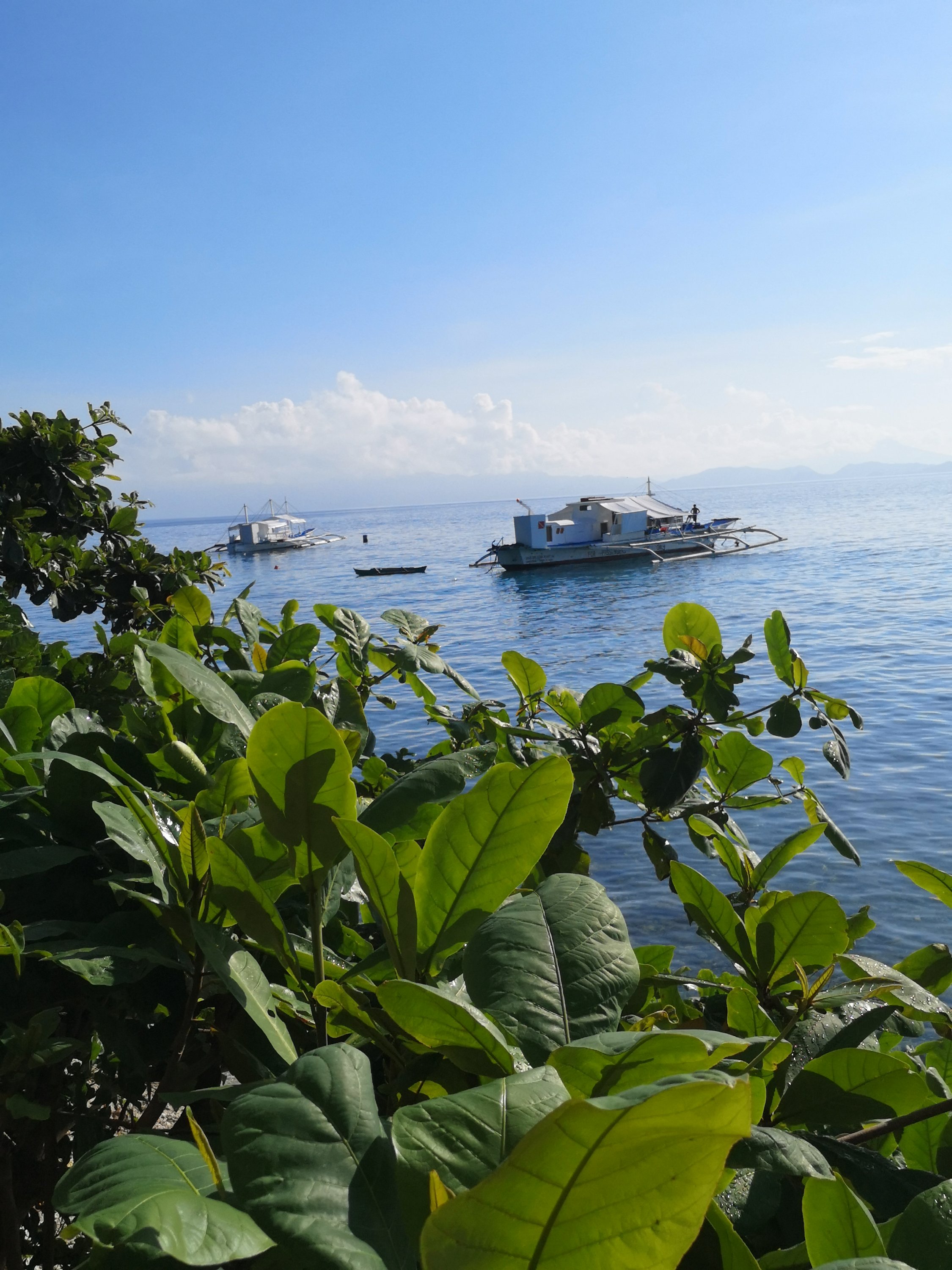 The weather has reverted to amazing, already 31 in the shade, I suspect a repeat of yesterday’s pre-dive dip may be on the cards.Here are a few frog fish from yesterday’s dive: 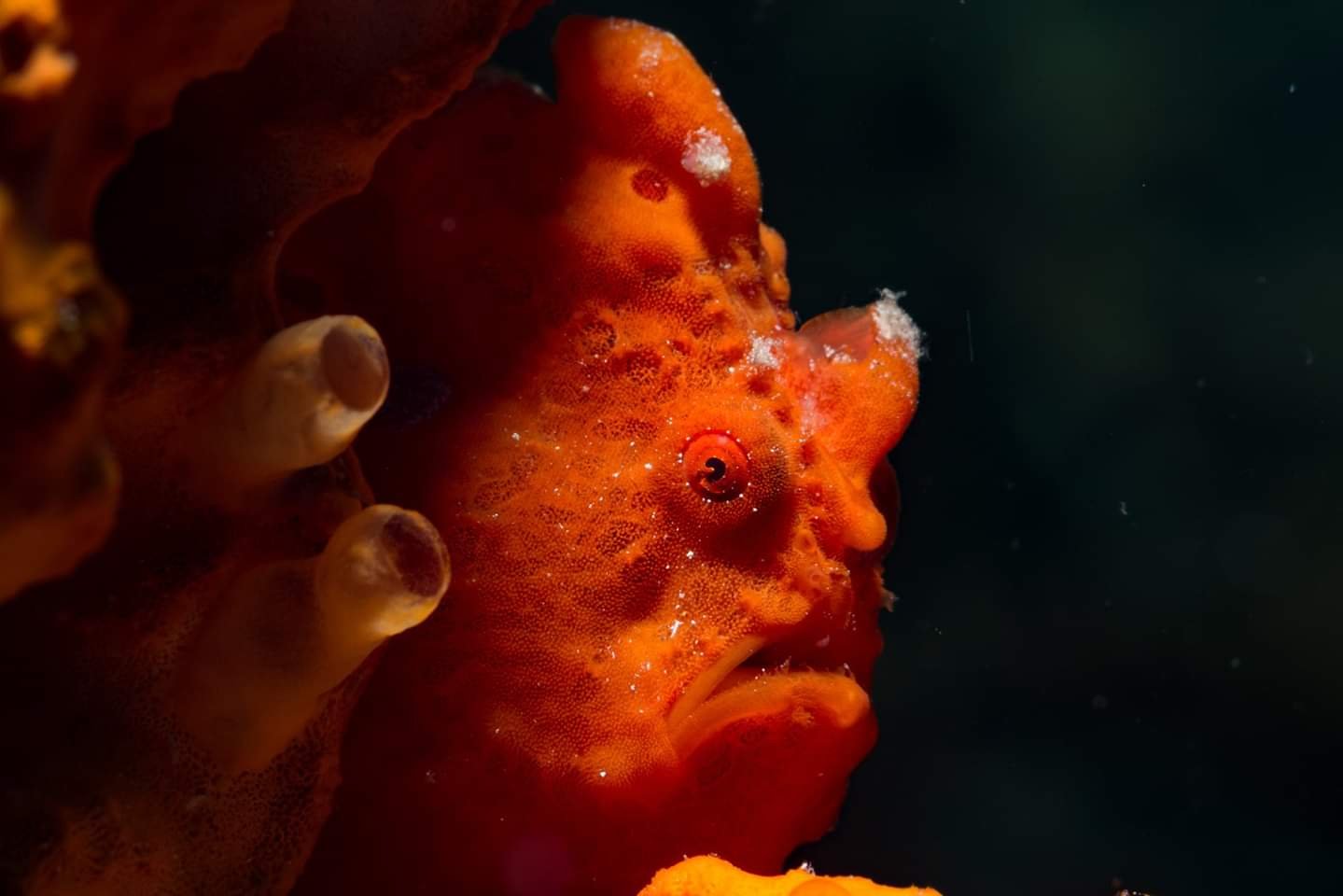 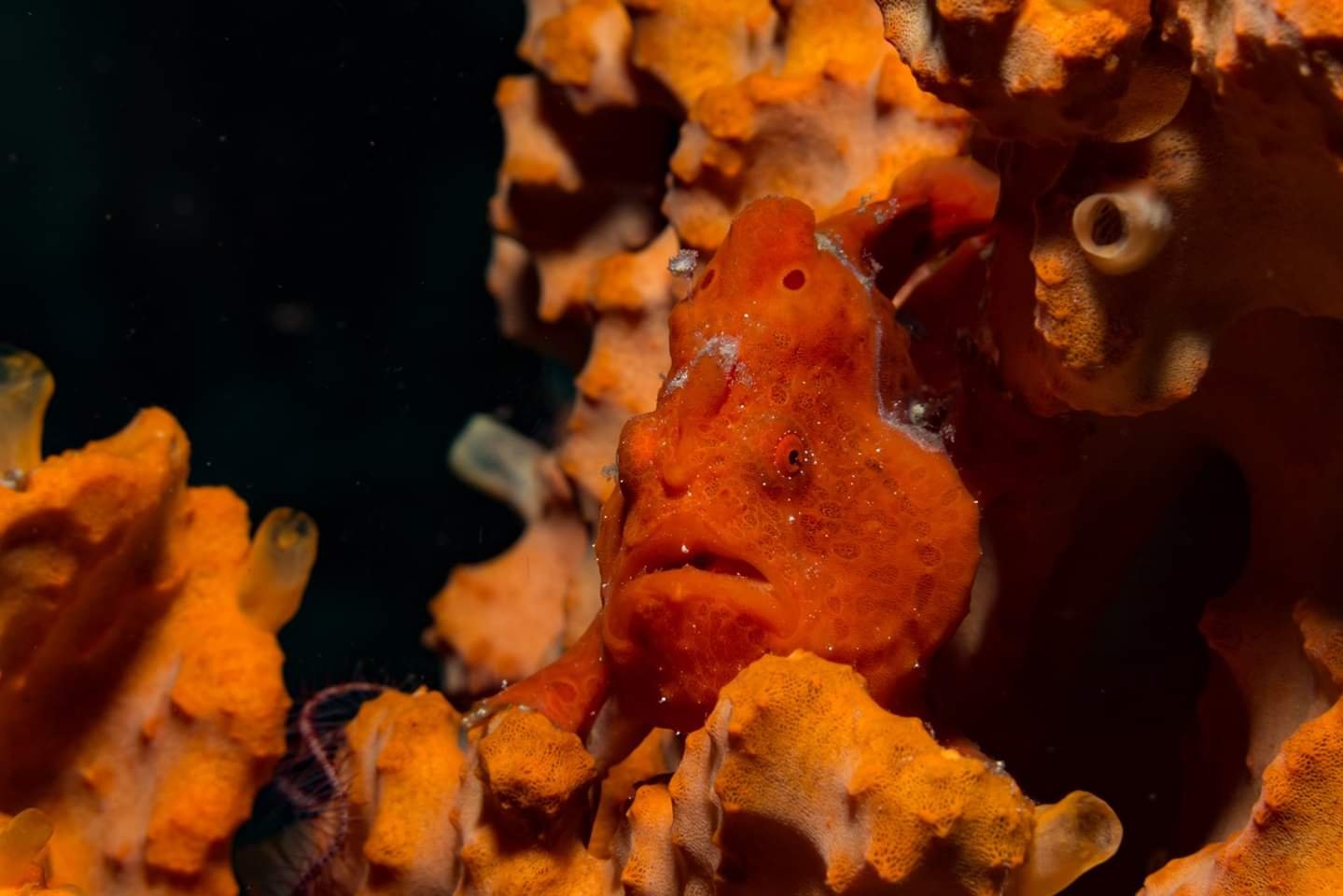 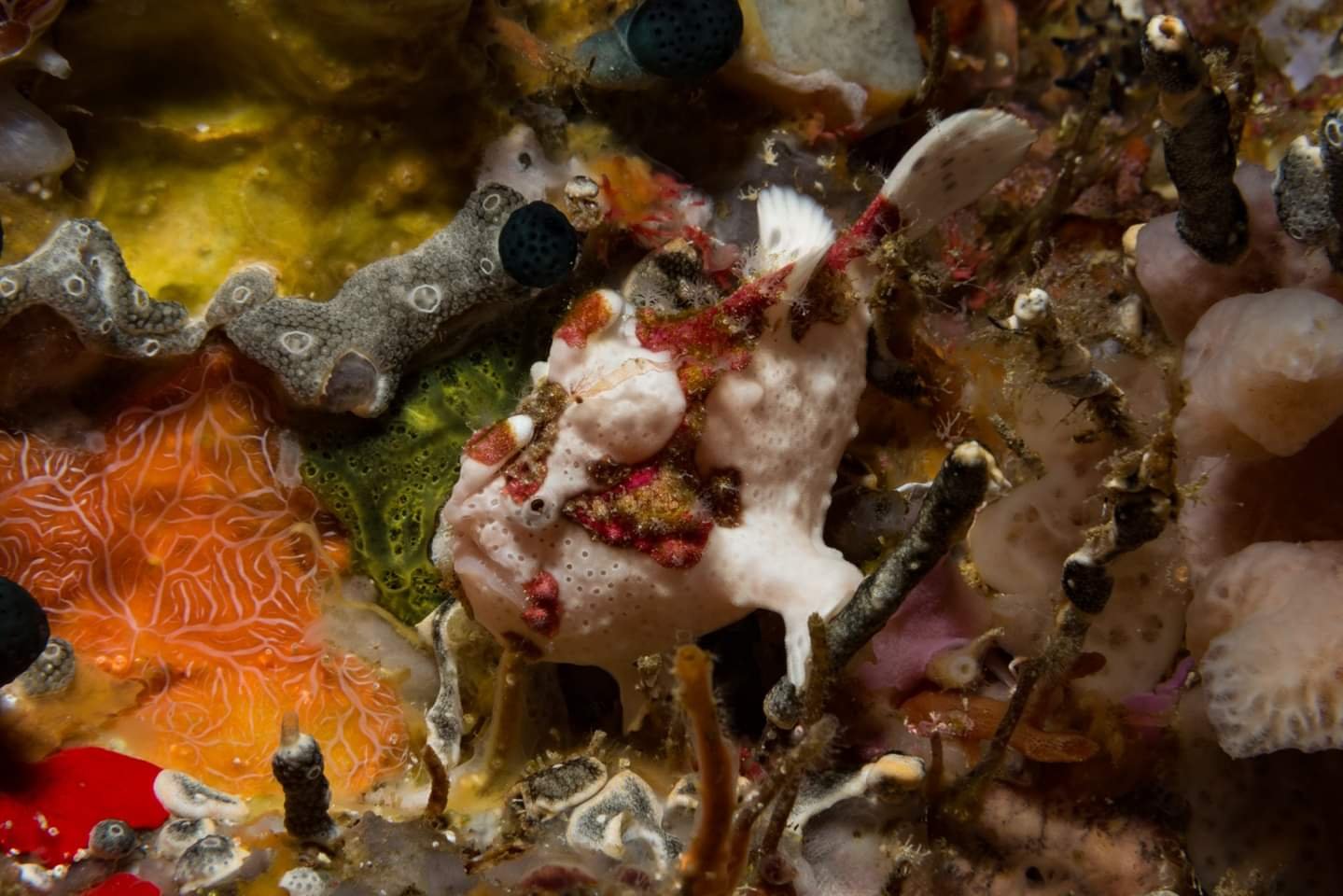 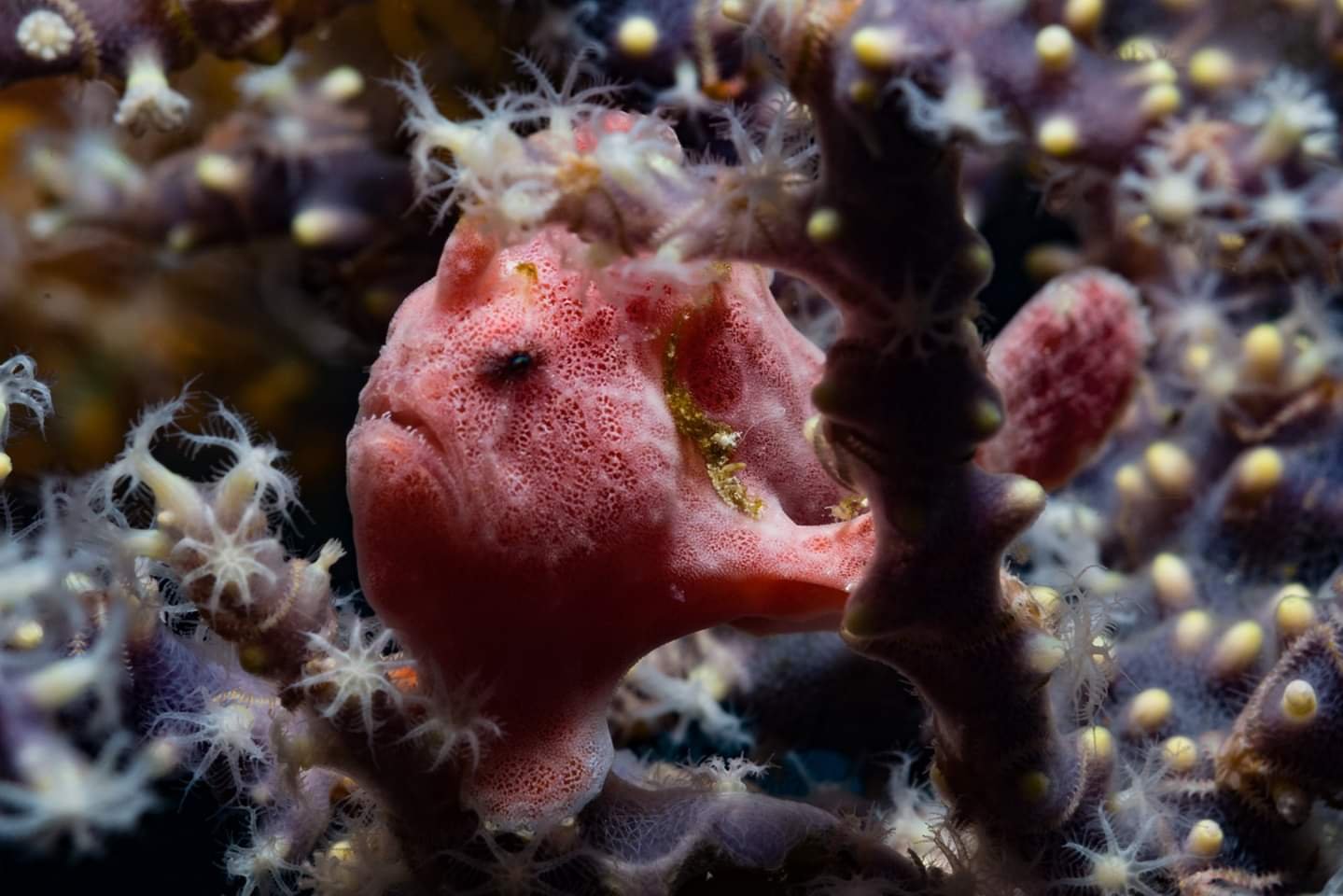 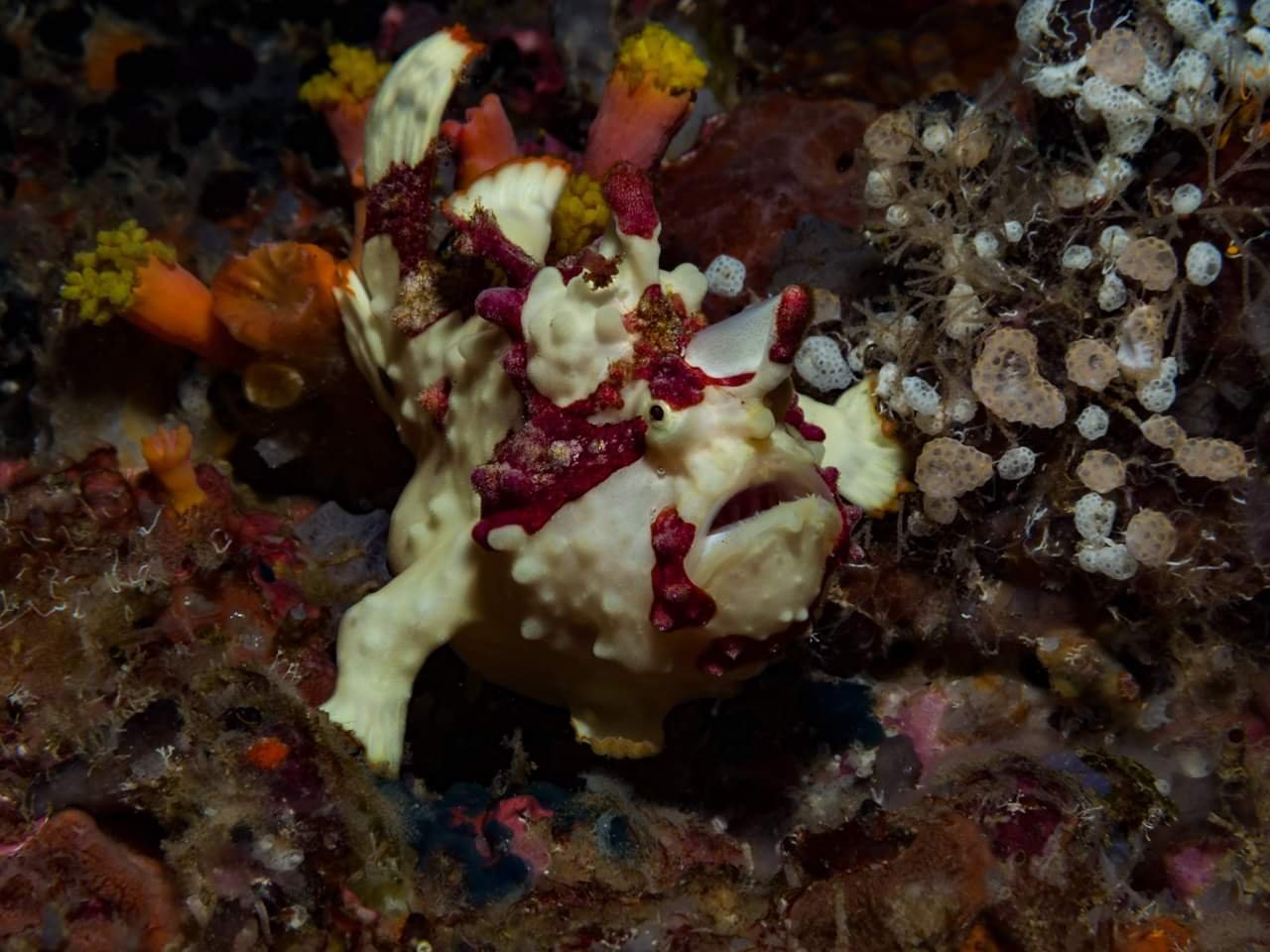 Faces only their mothers could love?Well, what an amazing couple of dives, absolutely fabulous along the most amazing walls all the way from 30m right up to the top. More fish than one can comprehend. All the usual suspects plus loads more more. At one point we spotted a couple of Ramoras trying to sneak up on Judy, unsuccessfully!Lots of soft coral shots for Jo to work on later. I found a ghost pipe fish too, which was nice.Lots of staff joined us today for some fun diving.Stir fried cabbage with ground pork for lunch, super spicy, super lovely. 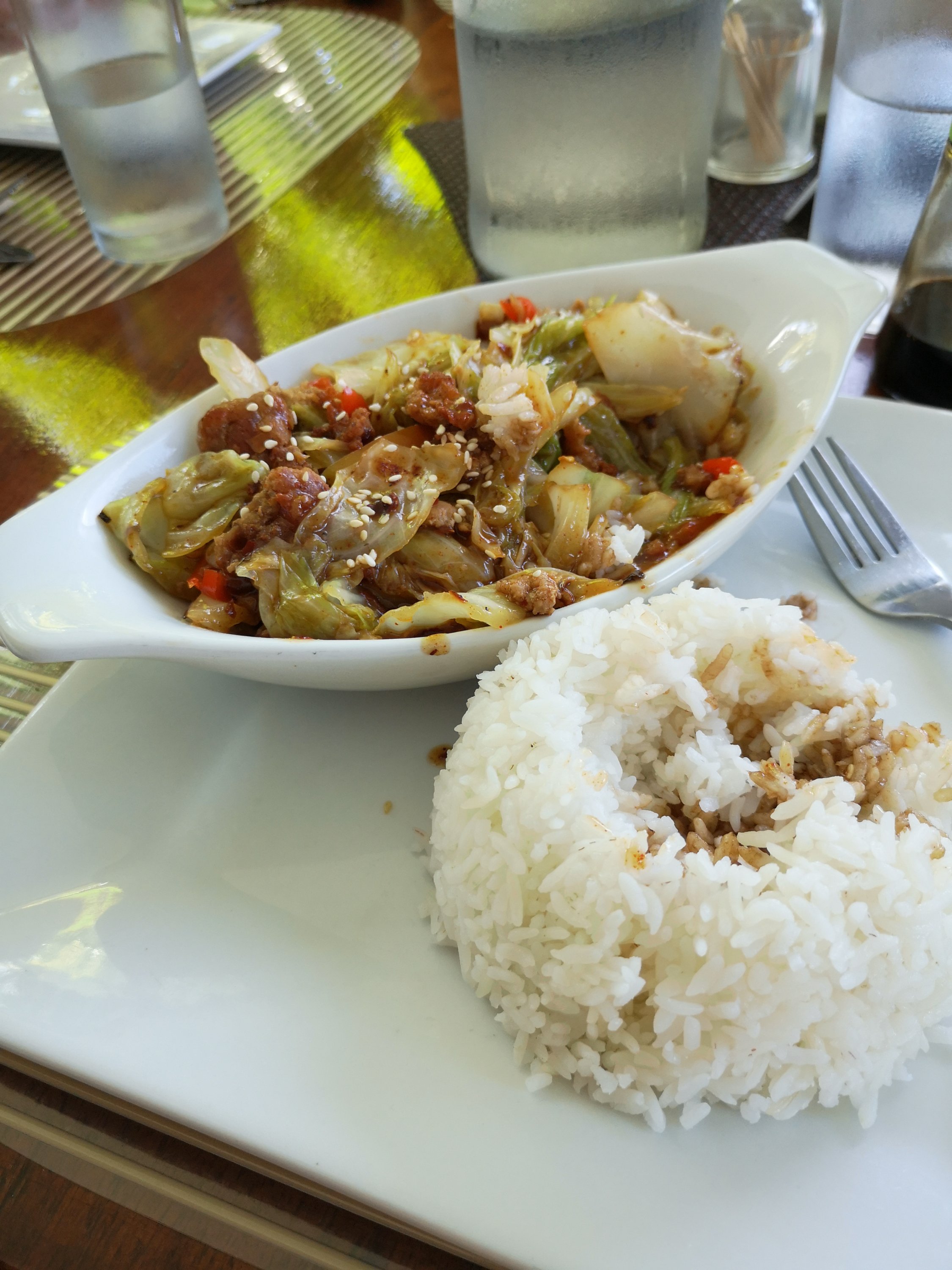 This afternoon’s dive is supposed to be a muck dive called Tambo, let’s see what happens.Tomorrow we have a boat BBQ so we go across the bay for three dives with BBQ lunch. The plan is however fluid and subject to constant review. Barry and I head of down to Alma and Jerry’s to adjust our piglet booking from Saturday to Sunday so it gets a temporary stay of execution. What with it being roasting outside, I head back to the room for a quick shower. Only 30 minutes before we are back on board for the afternoon dive.A group of about eight HAD’s has just arrived, it will be interesting to see how that turns out, hopefully good use of both boats will be made otherwise we shall be on for regular helpings of diver soup!🥣🥣🥣🥣🥣🥣🥣🥣🥣🥣🥣So this is how it went, a few of the HAD’s take to sitting on our chairs outside of our apartment, this vexed one of us quite verily so, to the point where wasps were being chewed and lemons were being sucked. In a moment of sheer foolhardyness I elect to grow a pair (however small) and make our presence felt. I concoct an excuse to go back to the room, I grab our room key and approaching our room I plant my camera fairly and squarely on the table in front of our new guests (who until this point were blissfully unaware of their faux Pas) who, having now realized the situation, could not have been more apologetic and nice about the whole thing. They had thought that they were sat in some communal area and not in our porch.From that point on, the ones we talked to could not have been nicer.Don’t get wrong, there is an overdose of man-tour testosterone which we cannot hope to overcome but so far they have been great. The boat is however super busy and we are feeling more than a little outnumbered. Our opportunities of choosing dive sites appear to be diminished, at least for now.
It’s uber busy on the boat now, not the SBSR we’ve come to love 😪Regardless, we held back for the last dive so went in last, giving them a chance to get ahead, which they did and our dive was a group of six, having been joined by two of the China contingent.Quite a nice muck dive on broken coral with various outcrops. Highlights included a soft coral crab and a nice nudi.Now ordering dinner whilst enjoying a local beverage.

During our visits to Alma and Jerry’s they have had films on the TV and then they put on a Sogod Bay diving video, which is fine, but having visited here many times we no longer have to watch it as we know what is being shown by what music is playing on the soundtrack. We’ve had Tom Petty, now we’re on to Bob Marley, Adele is coming up soon! 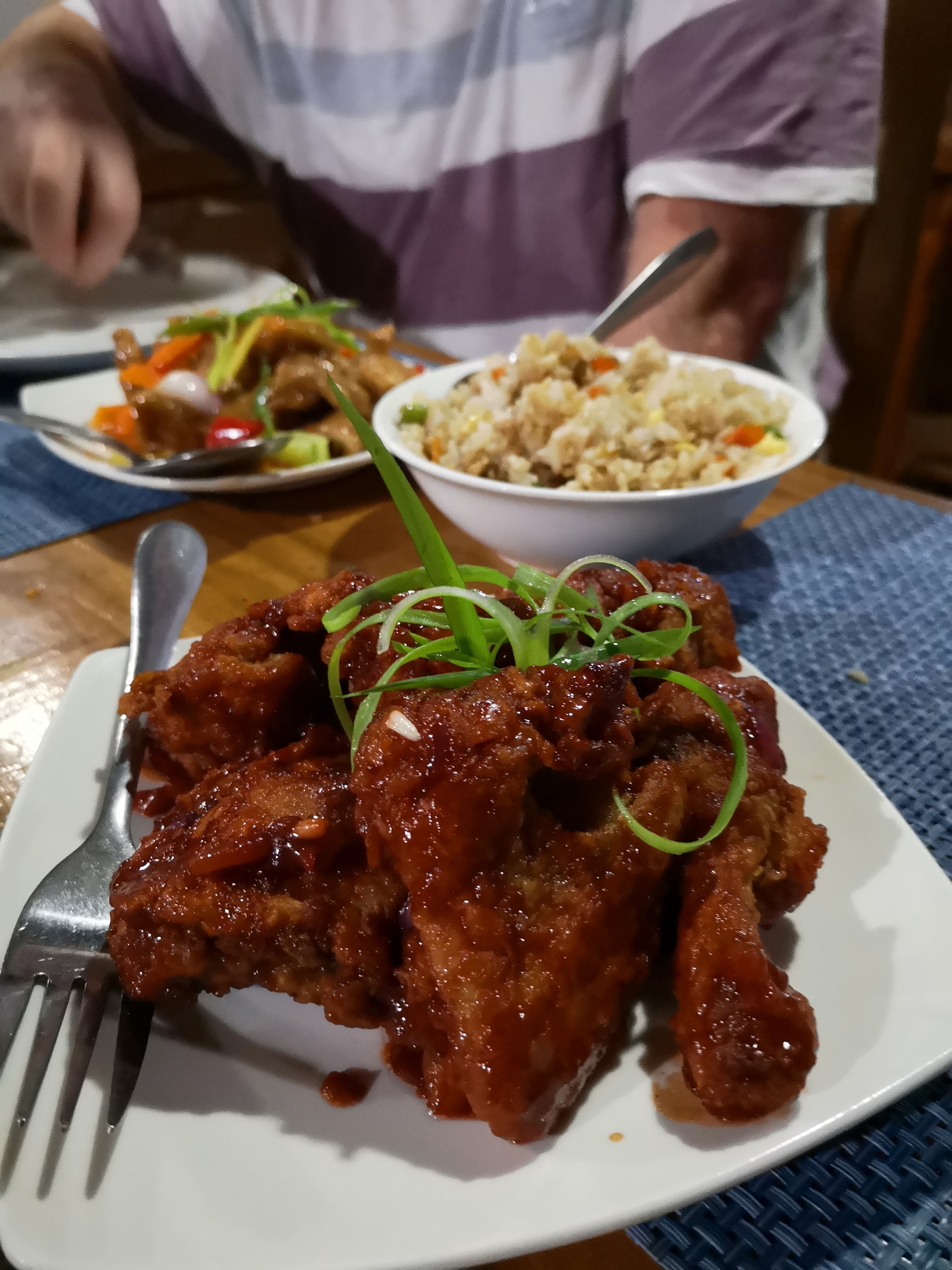 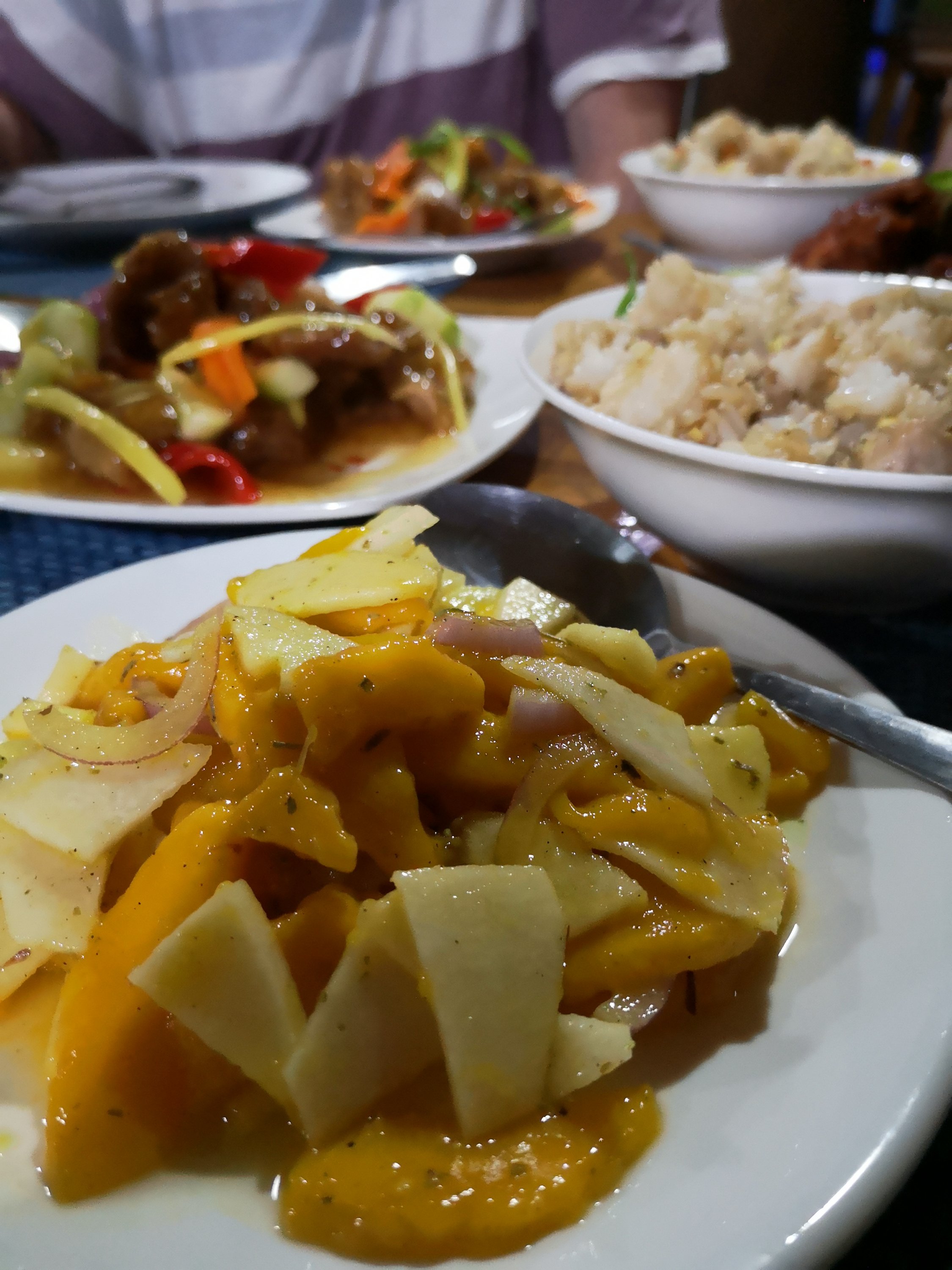 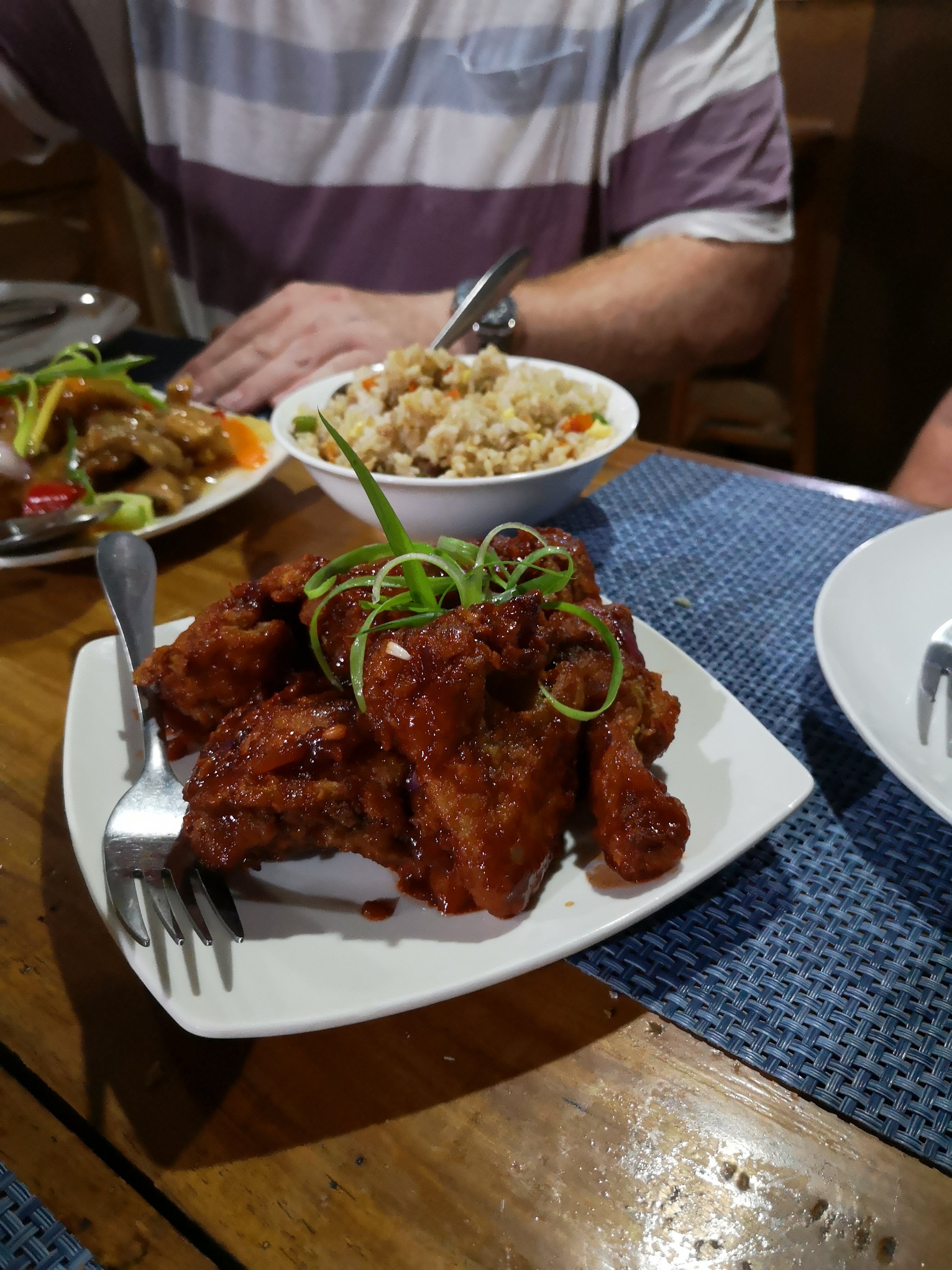 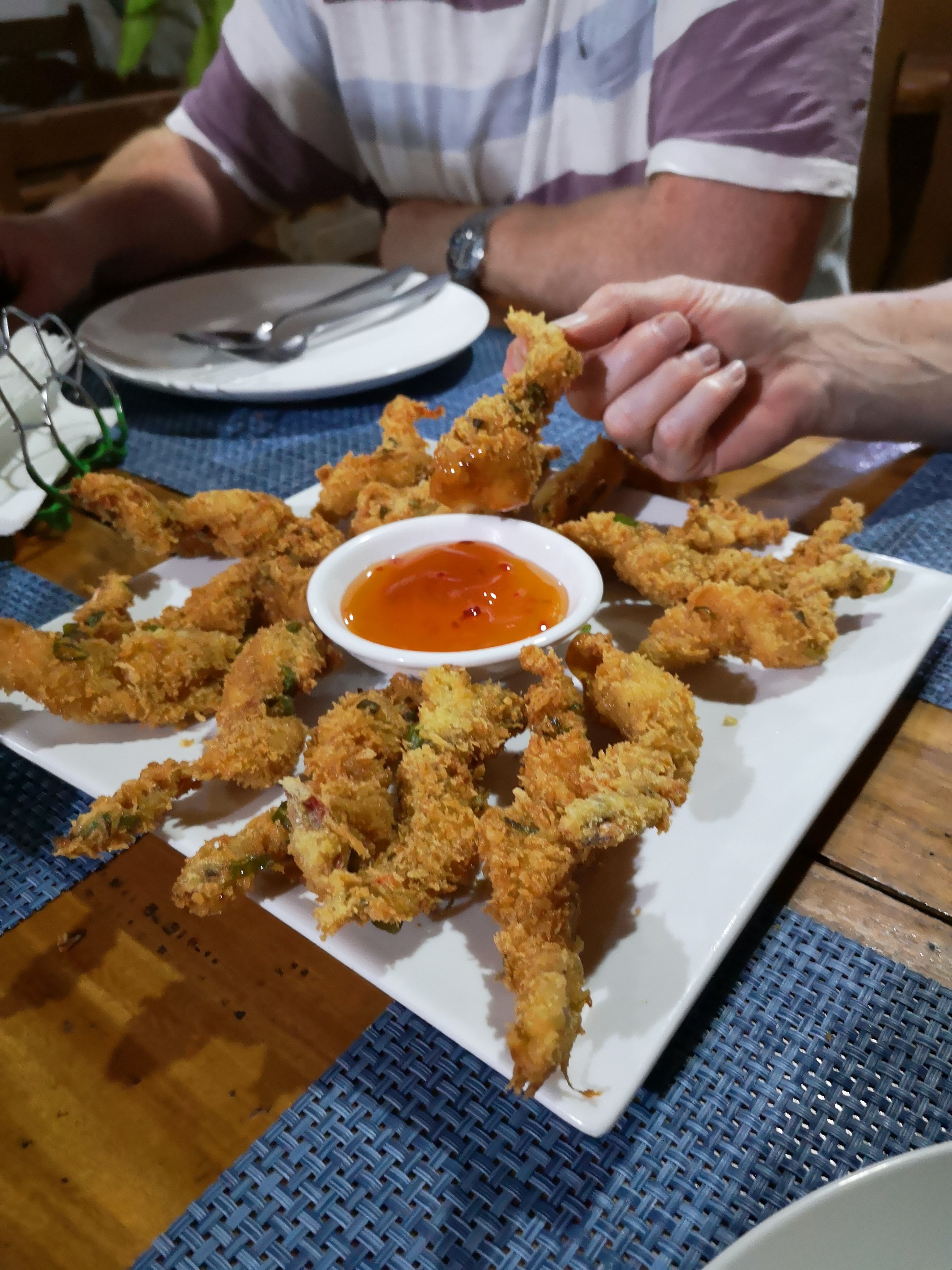