By Holiblog Contributor in Uncategorized on October 17, 2019

After what can only be described as an excellent nights sleep I woke up predictably early (though only 30 minutes ahead of my alarm) to the sound of the local cockerels who were all trying to make their presence felt. They succeeded.

I carefully negotiated the bathroom (which is actually one of those which is really only a lean-to on the back of the main room) and to my absolute relief there were no signs of scorpions, giant killer centipedes or even worse…. Spiders!).

Time to venture out on to the balcony with coffee and Oreos in hand. 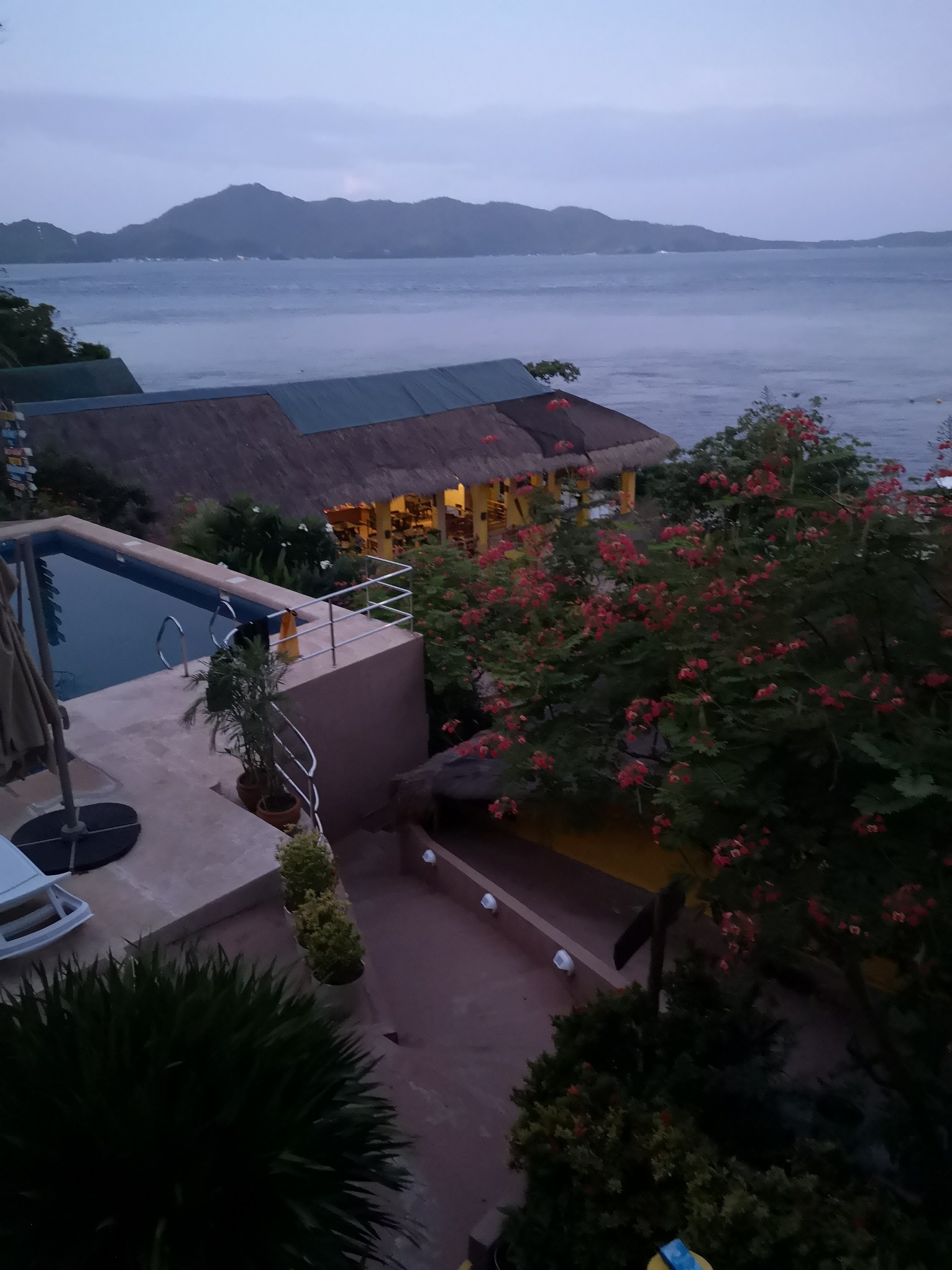 Still not quite light yet, the sun is yet to appear but light enough to tell that all appears well, no rollers on the beach, no gale force winds.

I suspect we shall be diving then.

We shall decend to breakfast in a while.

We are back in the same room that we had the very first time we came, no need for oxygen masks or a base camp half way up as it is but a handful of steps between us and the main centre of activity (ok, it might be 20 or 30 steps but not the 128 we had last time we came!).

Breakfast, more camera prep and then that thing we came here for, hurrah!

One point to note, since I started writing this note the sky has started to take on a bit of an orange hue. Either there has been some catastrophe to the east (forest fire, nuclear attack etc) or the sun is preparing to show itself, I shall report back with more detail on that when available. 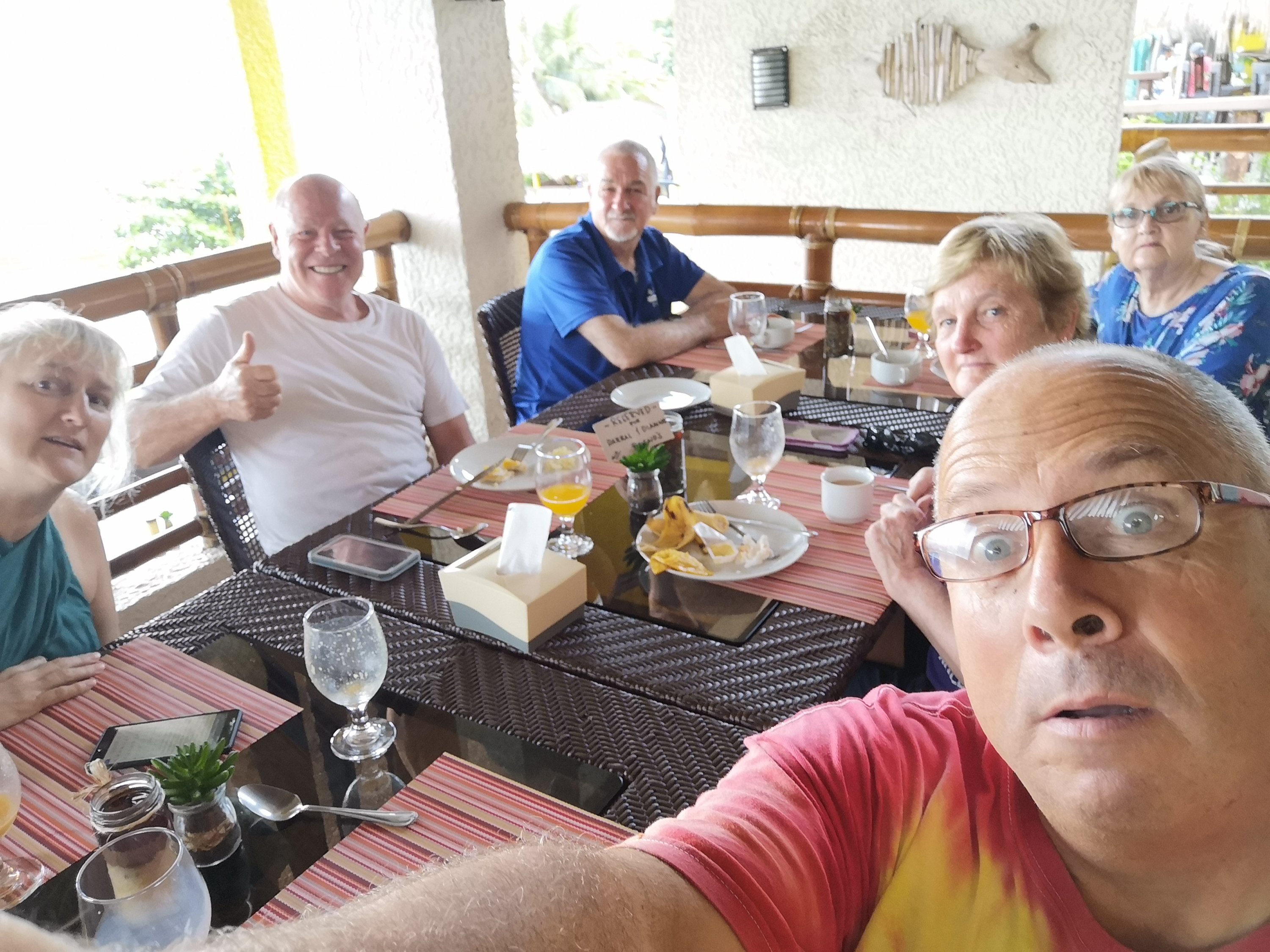 I’m pleased to announce that breakfast was a total success, cameras are mostly together and we’re now firmly in the pre dive chat phase.

Before long and without much of a briefing (we had all dived the proposed sites before) we are off. We had around the corner and along the coast for 5 minutes to arrive at Saim Sim, a sandy slope much dive where we are greeted with all kinds of octopus, frog fish, shrimps, cuttle fish and squid.

A lovely dive in 28 degrees which ended up lasting over 80 minutes.

Back on board for coffee and Oreos and the obligotry post dive banter.

We make our way to the second site which is called Bubbles. This site is known for the continuous flow of bubbles from the sea bed as well as the very hot rocks under the sand. This is caused by flowing magma only inches below the sea bed which is about to errupt at any time. Fortunately for us this didn’t happen during the dive, phew!!!!

Now then, a couple of monkey moments were witnessed during this dive. The first one being that Jo pointed out that we had both forgotten to put the diffusers on our strobes. The second being that I thought I noticed something odd about Jo’s computer. I can only think that she had noticed too because when I went to look at it, she hid it from my gaze. I finally got to see that it was still set on 21% and not the 32% that we were using.

Further investigation into this Faux Pas confirmed that it was in fact not an isolated incident which explained the unexpected 9 minutes of deco that I suddenly accumulated- oops.

Rest assured that appropriate recalibration has now been performed.

Back on dry land for a swift shower then lunch and now back to the room for some R&R before the next dive at three.

The afternoon dive (a most excellent muck dive down to 25m on a sandy bed) was followed by quick dip in the pool and then back out for the night dive over at Heidi’s point. There was plenty to see including frog fish, shrimps, a tiny blue ringed octopus and a well positioned nudi ( who doesn’t like s well positioned nudi?).

One of the frog fish was enjoying a feeding frenzy which was enhanced when we shone a light on it, tiny fish and other stuff everywhere in the water, the frog fish appeared very happy, we were bombarded by the same stuff from every angle.

Back for dinner consisting and a drink or two followed by camera prep, perhaps I’ll do that in a different order tomorrow…