Re-establishment of the trail between the Outer Mulberry, The Cuckoo Rescue Float and the Landing Craft.

The Outer Mulberry wreck lies two miles off of Pagham Harbour entrance in around ten metres of water and is a popular site for divers coming out of Selsey, Bognor and other nearby launch sites.

To the west of the wreck lie two other objects of interest, an Infantry Landing Craft and a ‘Cuckoo’ Air Sea Rescue float.

It is possible to visit the Outer Mulberry, Landing Craft and Cuckoo during a single dive. Many years ago, a trail made up of rope lines between each object was  established by the Wittering Divers Club, however over time the lines have become disconnected or lost and the trail broken.

Selsey Bill Sub Aqua Club (SBSAC) have recently re-established weighted lines between the various objects and the trail is once again complete. The permanent buoy which marks the Outer Mulberry (Phoenix Unit) has also been serviced with a new ground chain, ropes at 6m to aid safety stops and ropes on the buoy make it easier for divers to hang on to the buoy and then find the chain below.

If you make your way down the chain and follow it along the seabed, you will find that, at the end of the chain there is a large concrete block. A chain then leads from this block directly to the Outer Mulberry, where it is attached to a Clump Anchor (This looks like a large concrete barrel)

The chain is marked at one metre intervals by small white floats, known as the visiometer (another SBSAC innovation) 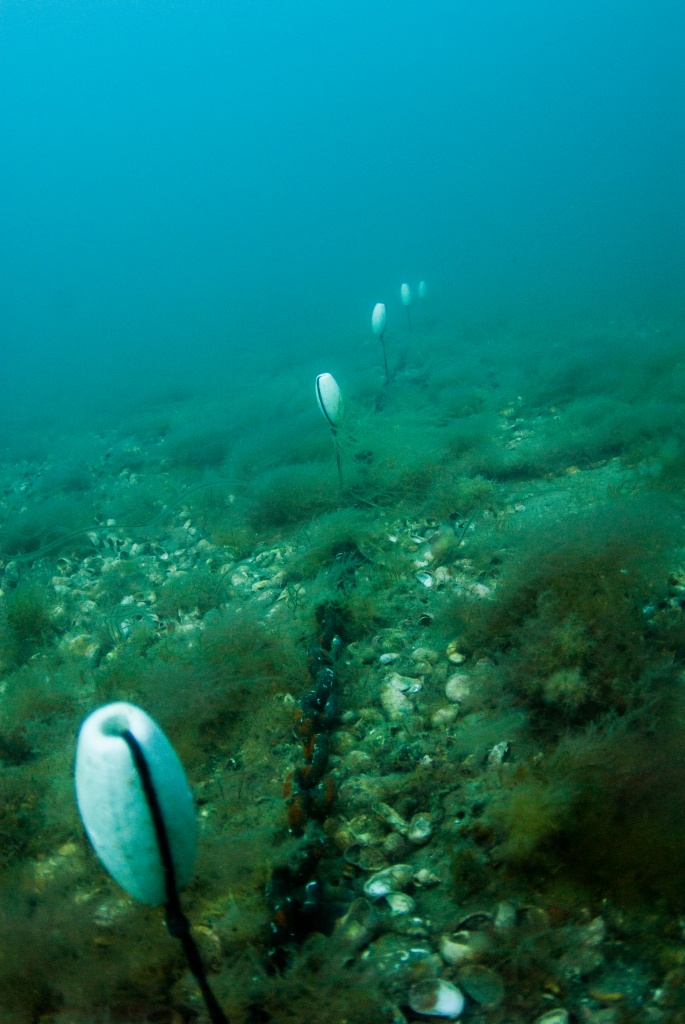 This will help resolve any arguments as to what the visibility was!

As you make your way along the chain you will discover two steel ‘hoops’ on the left of the chain. The first steel hoop marks the start of the trail. 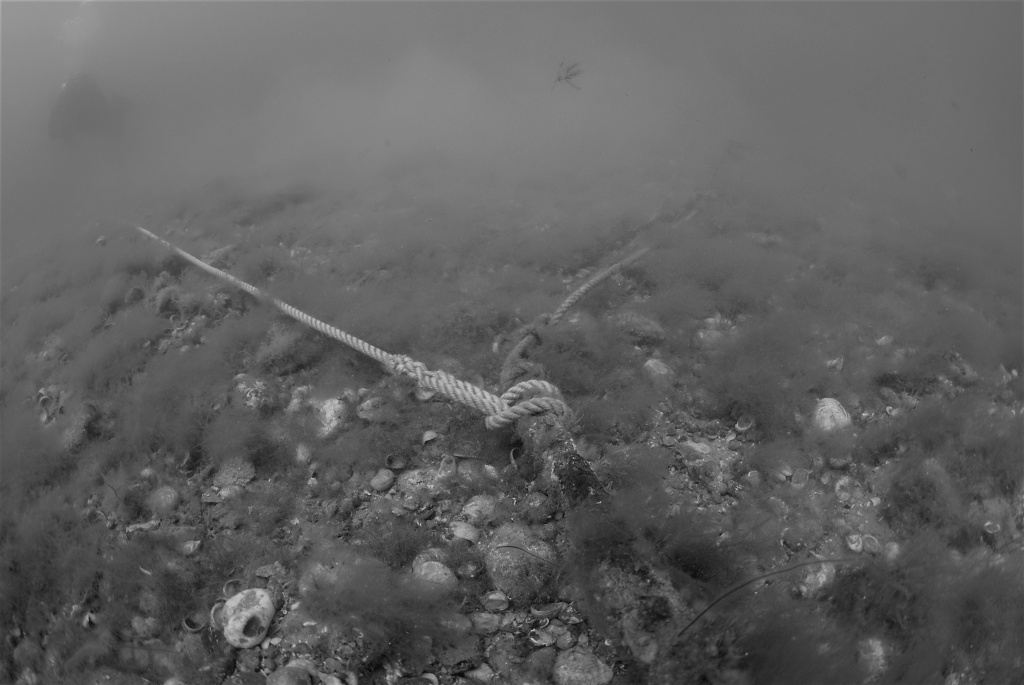 If you take the right most one, it will lead you on a North-Westerly course for a distance of around 80 metres.

At the end of the line you will find the Landing Craft. The line is tied on to its port side and about a third of the way along from the stern. 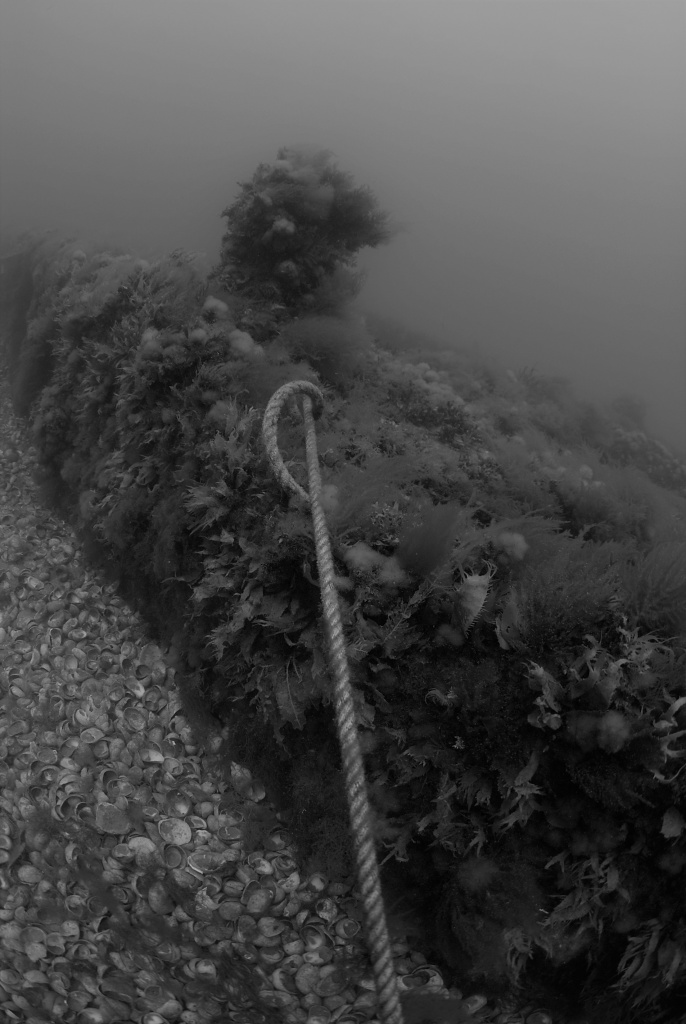 As you make your way towards the bow of the landing craft you will see a second rope about half way along on the port side, this leads off towards a set of bollards (previously part of the landing craft) at a distance of 57 metres on a course of 255 degrees (M). 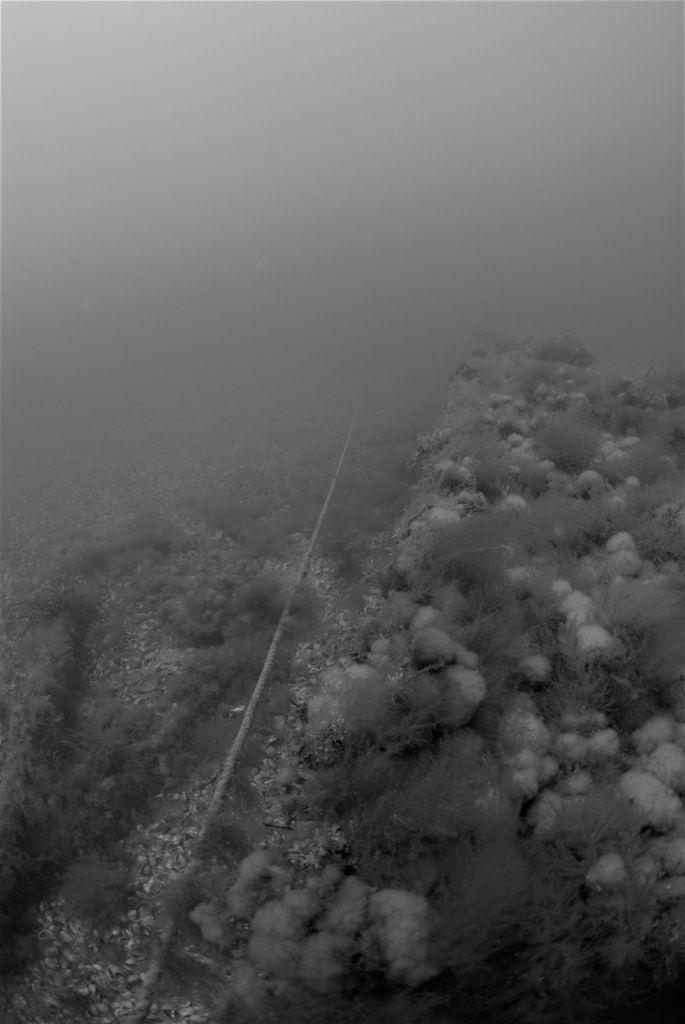 Keep heading towards the bow and you will find the landing ramp and over on the starboard side of the wreck another line leading directly forwards, this leads off to the Cuckoo on a course of 269 degrees (M) which is around 103 metres away. 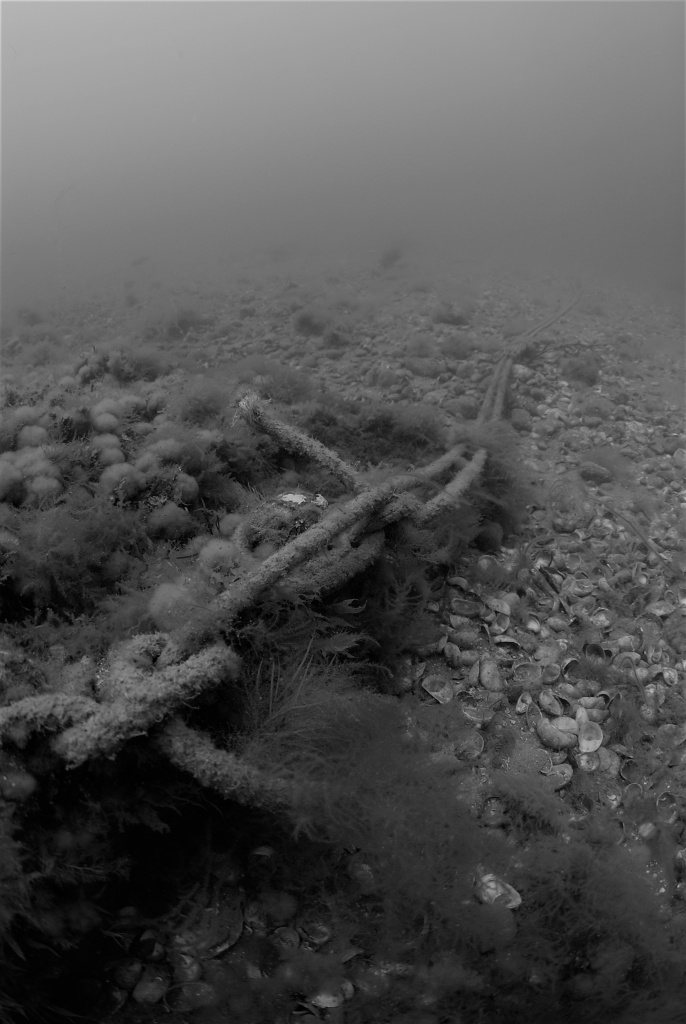 Following this rope will bring you to the stern of the Cuckoo on the starboard side. 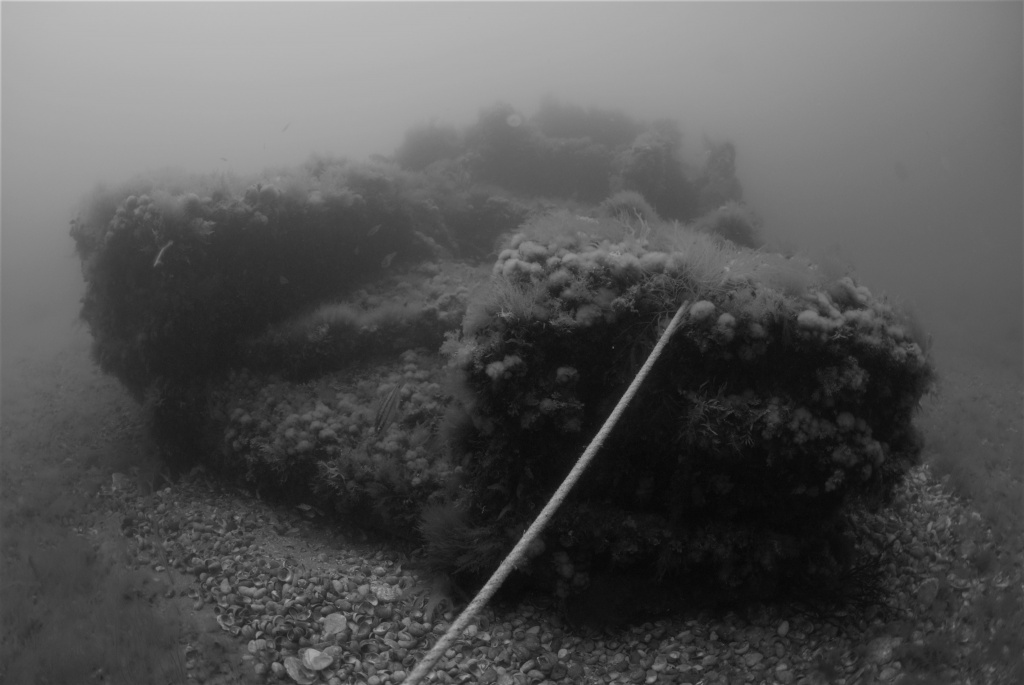 As you navigate this trail you will encounter a variety of marine life including rays, plaice and other flat fish, cuttlefish, dog fish, nudibranchs, sea hares, sea urchins and anemones and brittlestars.

Around the Cuckoo and Landing craft you may see Ballan Wrasse, Grey Mullet and Bass as well as smaller fish such as Corkwing Wrasse and Tompot Blennies. Crabs and Lobsters are also seen from time to time. 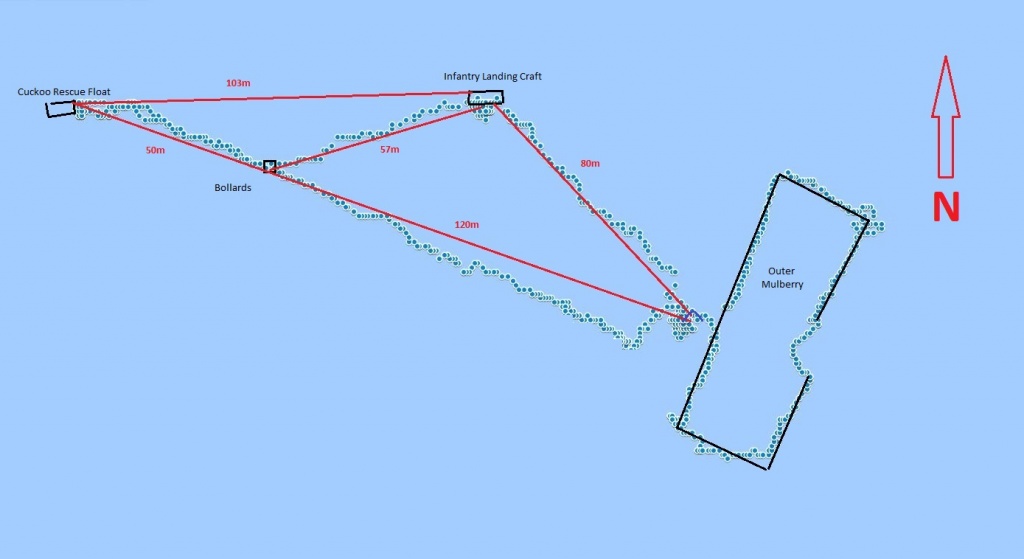 Once you have completed the trail you could (if time, air and conditions allow) do a circuit of the Outer Mulberry.

All the ropes in the trail are now marked with coloured plastic tags. If you want to head directly to a particular site, just follow a rope with that coloured tag on it.

These bearings and distances have been calculated using GPS Data collected during a dive around all parts of the trail.

The Mark 1 was an early British model which could be slung under davits on a liner or cargo ship. It is relatively small and its load was limited to a medium tank, 26.8 tons of cargo or 60 troops.

The landing craft is around 13m long and 4m wide. It was powered by two Chrysler 100hp petrol engines and could make around 7 knots. The 6-man crew also had two .303” Lewis guns at their disposal.

The wreck now consists of the frame of the original hull and the landing ramp. 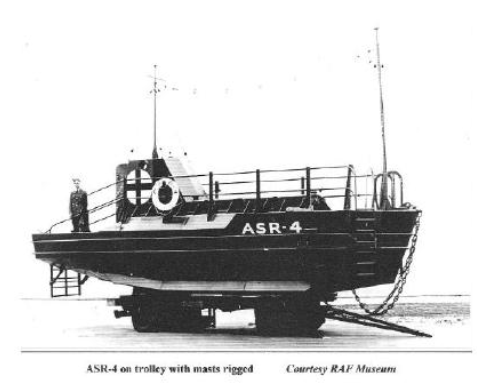 These were located at various points along the coast and were intended for ditching airmen whose aircraft had been damaged and were unable to land. The airmen would to make their way to a Cuckoo by inflatable life raft or by swimming. On the outside were various ladders and hand holds as well as a long sloping stern section which could be easily mounted. Inside were dry clothes, blankets, food, drink, bunks and radios. They were also equipped with books and other materials to keep the airmen occupied until help came!

The Cuckoo is still in good condition with the hull intact as well as the various ladders and hand holds. The hull is around 10m long and it stands at around 1.5m above the sea bed.

The following picture and text relating to a similar Cuckoo ‘ASR 10’ is reproduced here by kind permission of the Scottish Maritime Museum: 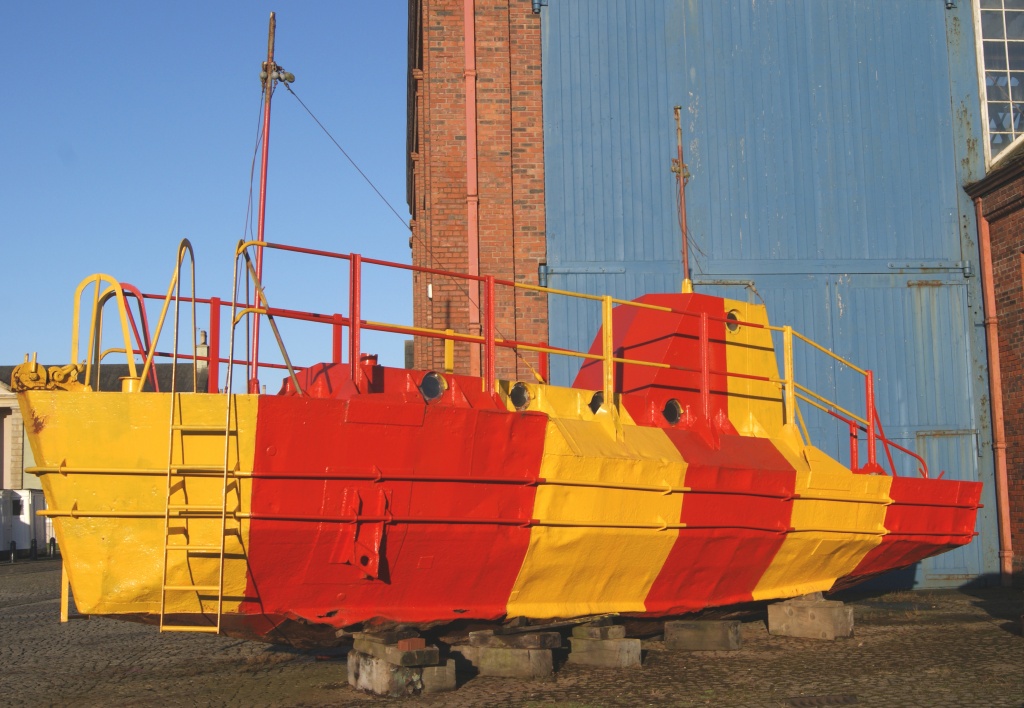 Built in 1941 by Carrier Engineering of Wembley as part of a 16-vessel order by the Air Ministry, Air-Sea Rescue Craft 10 (or ASR10) is now a rare example of a type of craft which played an important role in the North Sea and English Channel during WWII.

Officially code named ‘Cuckoos’ and referred to as ‘Ocean Hostels’ by the press, these highly-visible ASR craft had no engines and were instead moored at strategic intervals along the bomber routes to occupied Europe.

Maintained by the Air Sea Rescue Service, their role was to provide emergency shelter for the crews of downed aircraft, and each contained vital equipment and supplies, including preserved meat and vegetables, biscuits, tea, cocoa, rum, drinking water, bunks for 6 men, blankets, towels, washing gear, books and playing cards, all of which would reduce the shock of the airmens’ ordeal. First aid supplies were also on board, and a flag which could be flown to indicate that the craft was occupied. The men were able to radio for assistance and a fast rescue could then be carried out.

The following instructions found inside the vessels were a fine example of humour prevailing despite the seriousness of the crewmen’s situation:

1. “Air sea rescue float No. 10 welcomes you, and hopes that you will be comfortable and that your stay will be short.”

2. “Though the host is absent you should find all you need. Dry and warm clothing, food, drink, and a smoke, a stove to cook with and blankets to sleep in. Please help yourself but do not consume all the stores the first day.”

ASR vessels were of a welded steel construction with a steel superstructure and mast. Their hulls were brightly painted in red and yellow bands, which made them easy to spot at sea, and the floats were designed to be easily boarded, with bars extending below the surface to give foot and hand holds. Their sterns were also cut away so that ladders could hang straight down and be easily climbed.

While the floats no doubt boosted morale, there few recorded instances of their use. Of course it was not just British airmen who were able to access the floats. Although Germany had their own version, nicknamed ‘lobster pots’, it has been said that German E-boats used to visit to make use of the supplies on board. Enemy airmen found on board the vessels were taken as prisoners of war.

ASR10 was moored by Dover during the war and was converted to a yacht in the 1950s. She has since been restored to her original condition, with the Scottish Maritime Museum receiving her after she lay derelict on the slipway at Battery Park, Gourock, for many years.

Although not in the mainstream of maritime activities, she remains an example of the ongoing challenge to save lives at sea and a reminder of the importance of the sea to Britain during successive wars.