By Holiblog Contributor in Uncategorized on October 24, 2018

What’s this? Half way through the day and no blog update? OK, let’s sort that out right now. 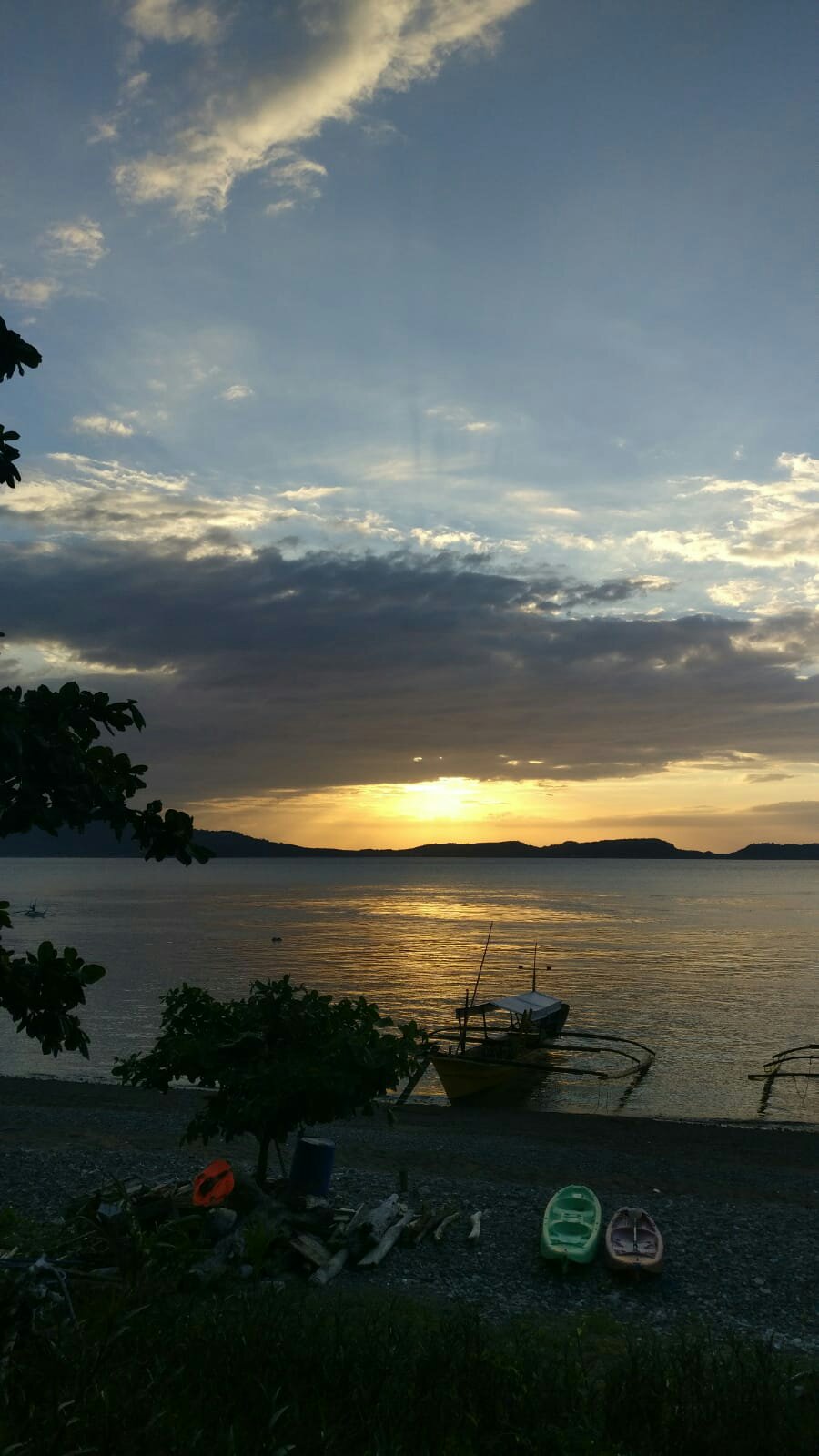 As for today, Darral & Dianne beat us down to breakfast, Shock, Horror and Embarrassment, I kid you not, there shall be an inquest!

In a moment of bad planning we end up with a little more fresh mango juice than we had initially hoped for. 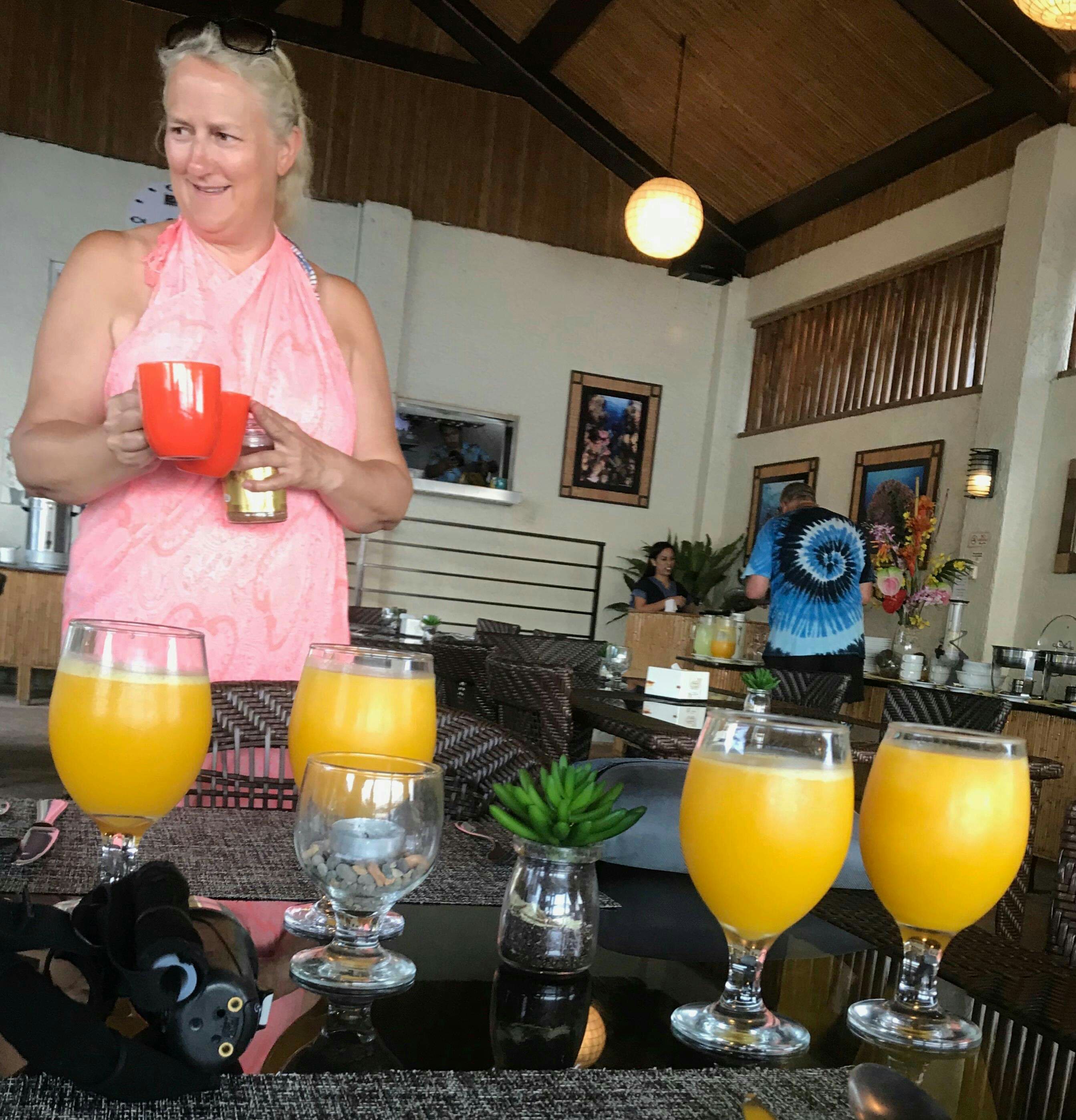 It seems that both of us had the same idea. As if that wasn’t enough I just noticed me in the picture sneaking in a glass of their chocolate milk, yum!

After prepping the cameras we jump on board our boat and head out across the bay to a dive site called Sombrero. This is a small island out on it’s own which has a beautiful and unspoilt coral reef area which looked amazing. Then the sun came out and it looked even better.

A fabulous 86 minute dive full of nudi action as well as amazing soft coral and sponge loveliness, good job I had gone with the wide angle lens for this one.

After the dive we head back across the bay, I take the usual all in one (sugar with a little coffee and whitener) beverage which surprises me every time I take a slurp as to how much sugar they manage to pack in there (a disappointingly huge amount).

Today in commerce I learn that the 80$ (Australian) that I got as a tax refund on the new lens can now be converted to Pesos, that helps with the tips.

Just had lunch, not too stuffed, time for a quick nap before the afternoon dives. Apparently it’s just us two on the boat this PM, Darrell and Dianne had the last day of their photo workshop so were tied up with that in the PM. Their photos and techniques have certainly come on a long way as a consequence. It is often said that a one on one photo workshop can bring your underwater photography on several years, it certainly did for us, money well spent. Time for another one perhaps?

We ended up nipping out to a nearby site called Aberden. to Dodge some current (new moon)

This afternoon we dive with Romnik as or usual guide Nanie has three afternoon off for domestic duties. 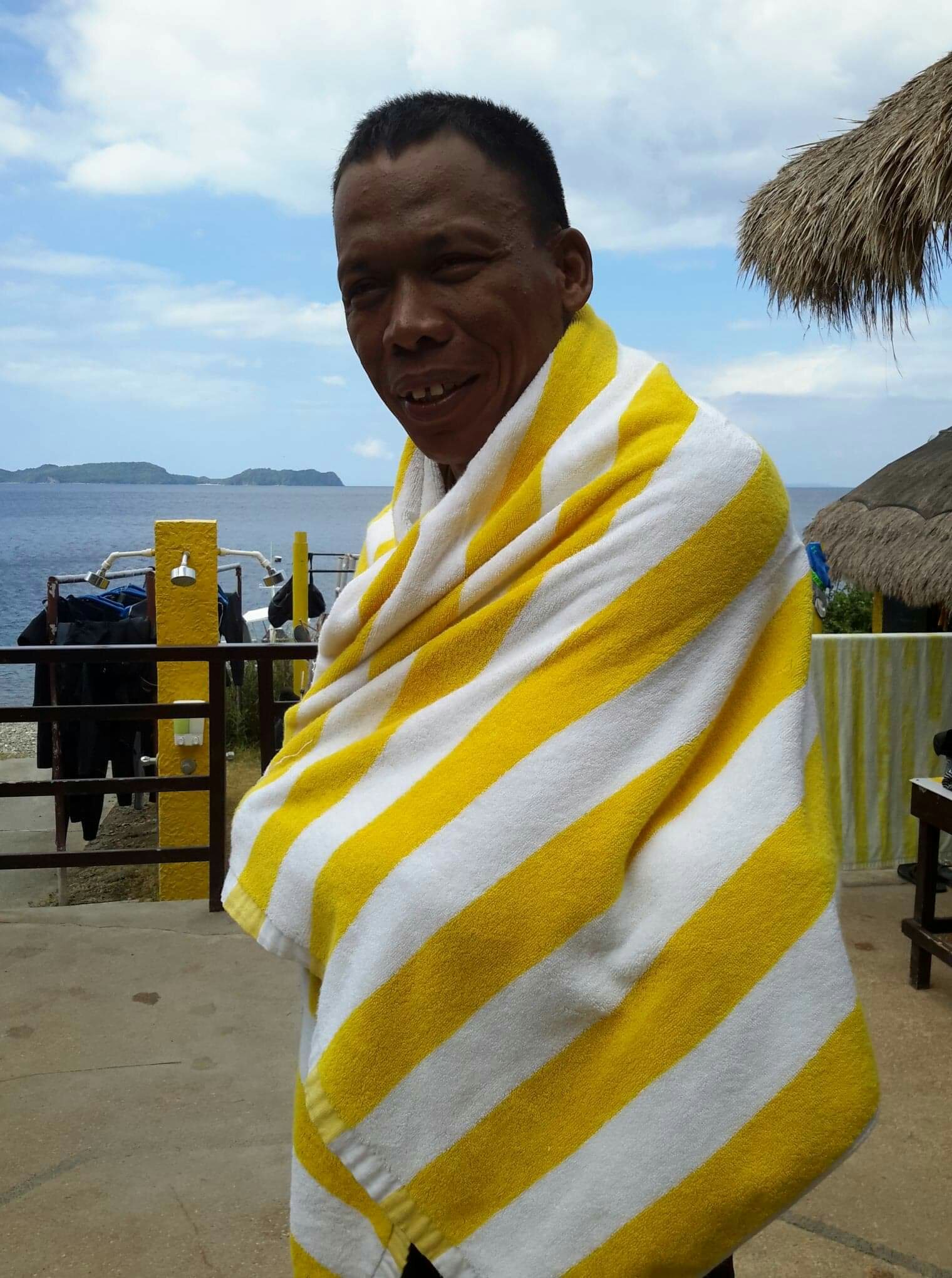 This site is a muck dive on a sandy slope descending down to around 18m, there were many coral outcrops at the top of the slope so we could happily fall back to those if the current got too much further out/down.

Before long it was obvious that it was getting up a bit so we return to the shallows to what ended up being a great dive in good visibility with excellent light. Lots of stuff to see, Jo got some more time with one of her new favorite critters. A banded sea snake, working on the classic head shot whilst avoiding it’s fatal venomous bite, a skill I have not had much practice with myself!

After a quick turn around and sufficient surface interval we head back out to Secret Bay for a night dive. This is another site which has hot sand at the sea bed due to volcanic underground stuff (I use the word ‘stuff’ as i am no geologist and therefore know no better words to use, as far as I am concerned there are massive flows of molten lava just centimetres below the sea bed. How else could it be explained?!?).

Critters included skeleton shrimp, nudis, crabs, shrimps, bobtail squid and a very obliging proper squid which instead of swimming away from the camera, insisted of getting right up to it. It made for some interesting shots!

Another great shot by Darrel Sutter, thank you Darrel. 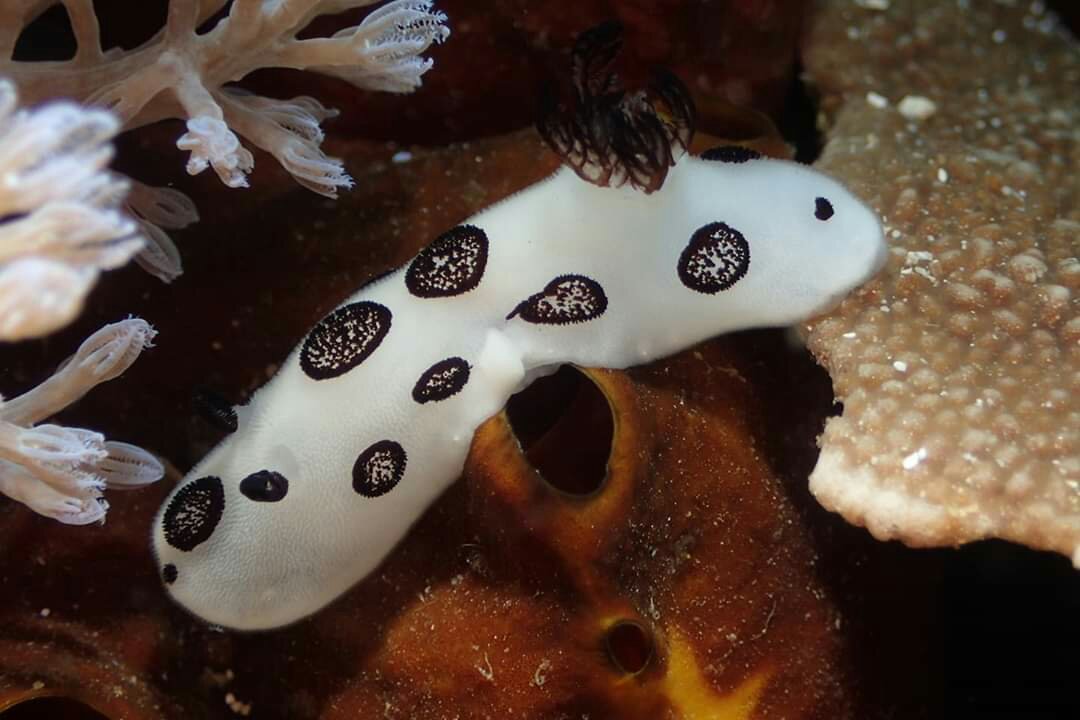 Back to base for showers and dinner, I use the showers at the dive centre whilst Jo ascends (128 steps) to our room for hers. This usually gives me some time to write up logs etc whilst sneaking in a Red Horse though this has all gone by the wayside since D&D arrived as it’s much more entertaining charting with them.

After a while Jo arrives at the bar and immediately orders a double Kaluha with ice. Strange I thought as following some unnecessary ness after consuming a dirty black Russian, Jo had taken a vow not to consume any more alcohol on this trip.

Upon questioning it seems that there had been an intruder in the room whilst she was taking her shower which resulted in two members of staff being called to the room brandishing whips and upturned chairs (in a lion tamer style) to deal with them. I shall leave the detail to her up coming blog entry. Suffice to day, she survived the ordeal AND there is a picture! 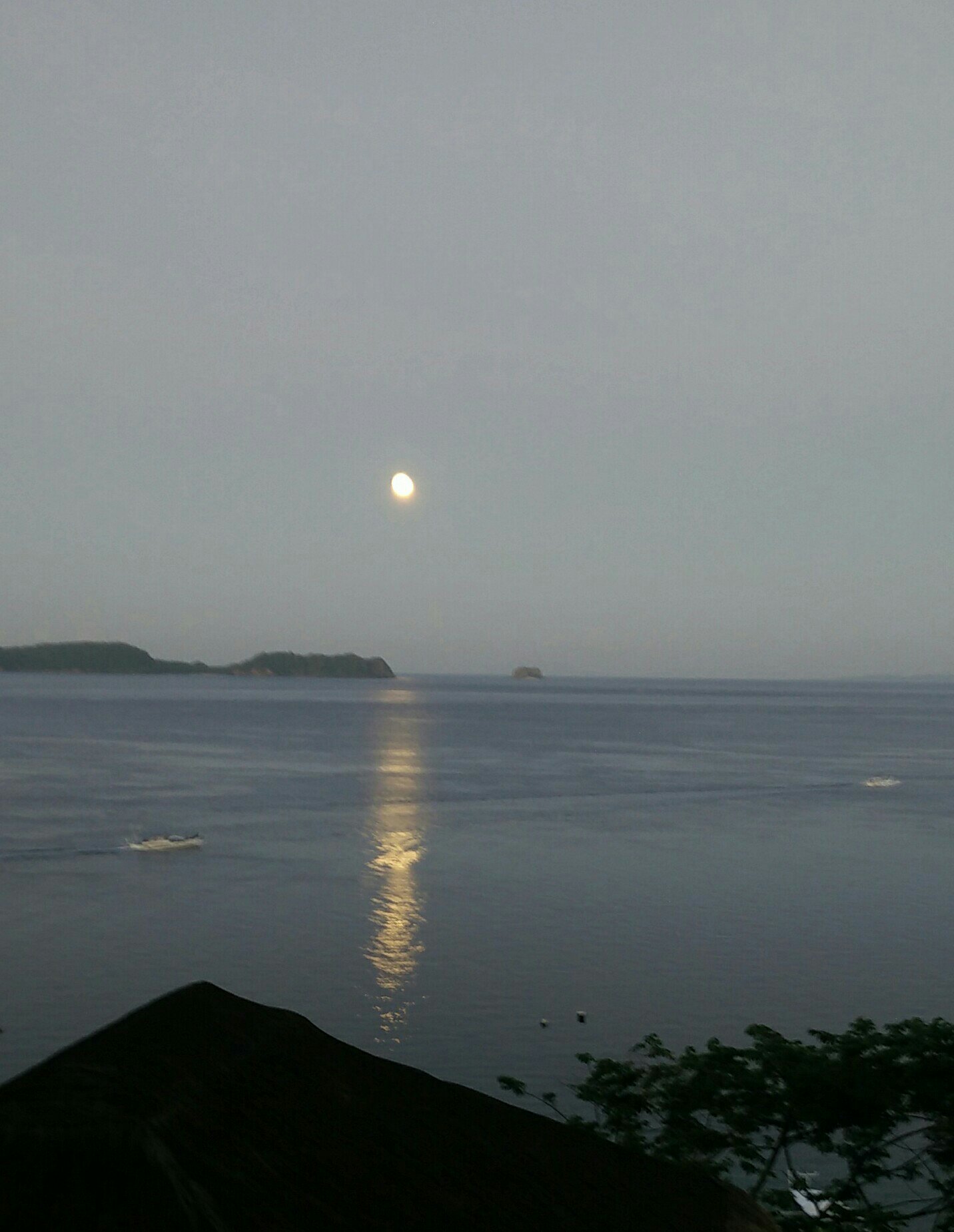