Home » Uncategorized » Anilao 2019 The Trip Out

By Holiblog Contributor in Uncategorized on October 16, 2019

The trip…Up early. Not because we had an early flight, just up early. Richard awoke at 3:30, did work stuff whilst I had three more hours in bed, that was early for me.

So, what do most people do in the three hours between getting up and being picked up by the taxi to go on holiday? Haircut? Hmmm? Richard feels that last week’s grade 1 needs a further trim. There was me thinking I might get a second coat of nail varnish on my toes….

Picked up on time by Ibo, our trusty but abusive taxi driver. Easy trip to Gatwick, Richard got the abuse and I hid in the back.

Check-in at the Emirates desk was interesting. Couple in front of us had four bags to check in, one of which was over the 32kg allowance.

This gave the nosey people in the queue (that’s us that is) chance to see what was in their bag.

I must say we were shocked!

The huge bag was full of Tunnocks wafers and Mcvities chocolate digestives. If you hear that there is a shortage, we know who caused it!

At the Red Lion for a drink and lunch. 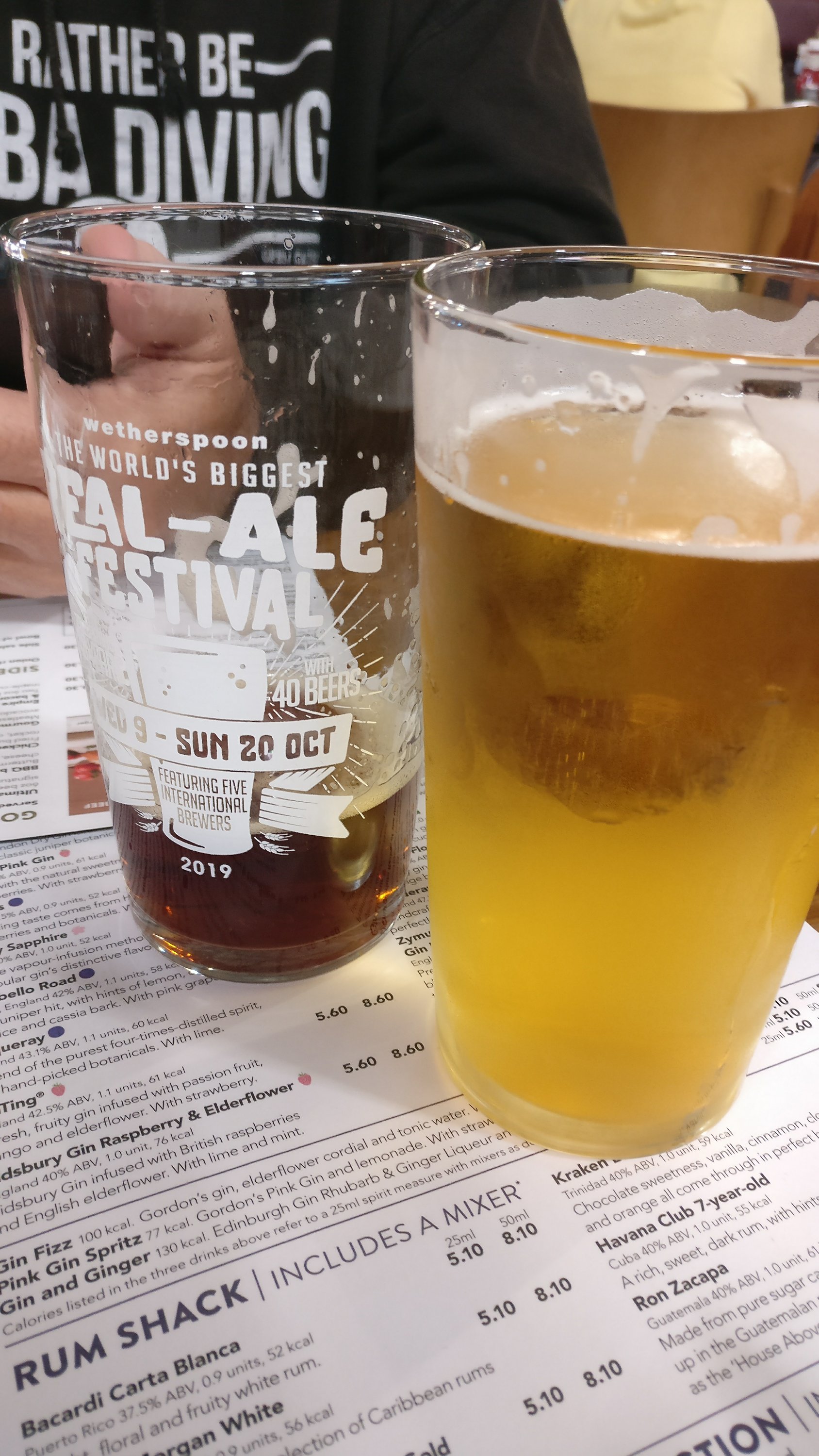 Looks like one of us is more thirsty than the other….

First flight was good. Six and a half hours. Food was good, as was my entertainment. Richard watched Hustle (rubbish), some other film with Greg Kinear (by the way, he is my cousin’s brother-in-law), a Johnny Depp film with Richard in the title and also a film called Silent something or other. As he can’t remember the names of any of them, I am not sure that we can recommend them.

By the way, I have learnt something on this flight that I feel that I should share….

Unicorn hoods with built in neck pillows should NOT be worn by men, regardless of age.

In fact they should not be worn in public by any one over the age of ten!

It does not matter that your girlfriend/wife tells you it’s cutsy because she obviously thought so as she had a matching one.

If the woman sat behind you on the plane was allowed to carry matches on board she would have tested if said unicorn hood was flame retardant!

View from my seat… 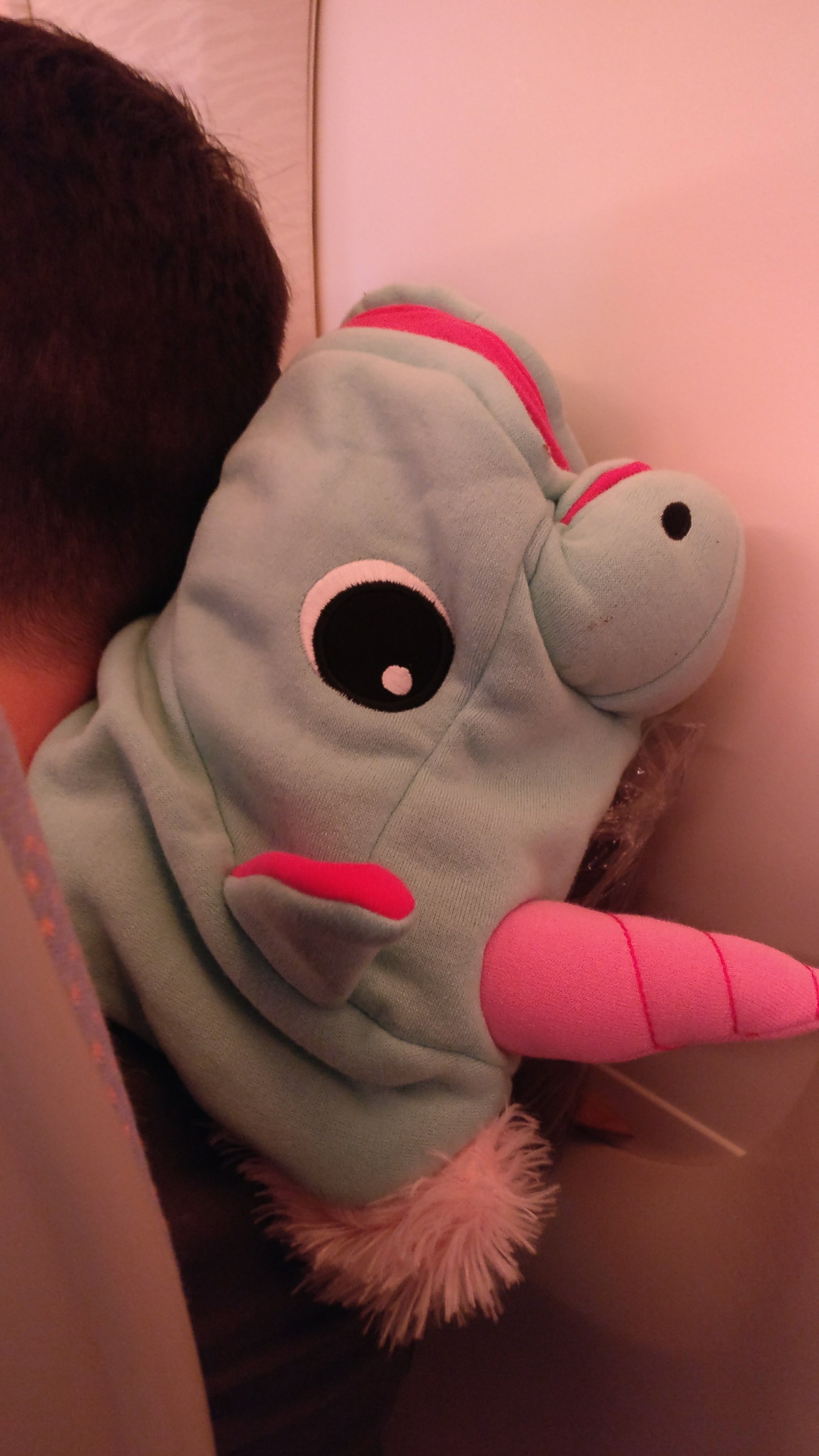 The second flight was late to leave as someone was removed from the plane! No idea who. They shouldn’t leave us hanging like that! We want to know what happened. I suppose, at least it wasn’t a British woman that was seen setting light to a unicorn hood. Anyway, as the passenger was removed, their baggage also had the be removed. It was, of course, the one at the back! So we left about an hour or so late but still got to Manila on time, thanks you favourable winds.

(I do have a couple of stories concerning incidents on planes including the guy sitting next to me taking his Crocodile Dundee knife out and putting it on the table in front of him, a full on cat fight and a man being removed from a plane by a full SWAT team. Can’t beat Jen’s hijack, flooding, fire story but still quite impressive.)

Getting back to the trip, I, possibly we, would say that my vegan meals were nicer than Richard’s standard ones.

Couple of films, Godzilla (just another Godzilla film) and Alita: Battle Angel (thoroughly enjoyable). I’m not sure what Richard watched, but then again I don’t think he is sure what he watched either. Think he might have spent more time choosing than watching.

Once landed, it took an age to get the baggage, then we had a very quick rendezvous with Ralf from Germany before settling in the taxi for journey to the resort. Quicker than normal, only gridlocked we saw, was as we exited the airport and after that it was straight through.

As the resort has no road access we stopped in an area a little up the coast and were then collected by boat. Darryl, our Aussie friend, was waiting for us. Big hugs all round, although didn’t hug him too tight as he had surgery on his spine in the summer. Didn’t want to undo all the good work. Anyone who has had a hug from Richard knows that it can be a bit like a visit to the chiropractor.

Five minutes down the coast and we arrive, met by the lovely Dianne, Geoff, Dianne’s brother and Sue, his wife.Here’s a picture of us, Dave, the big boss and welcome drinks. Not sure what Richard was doing… 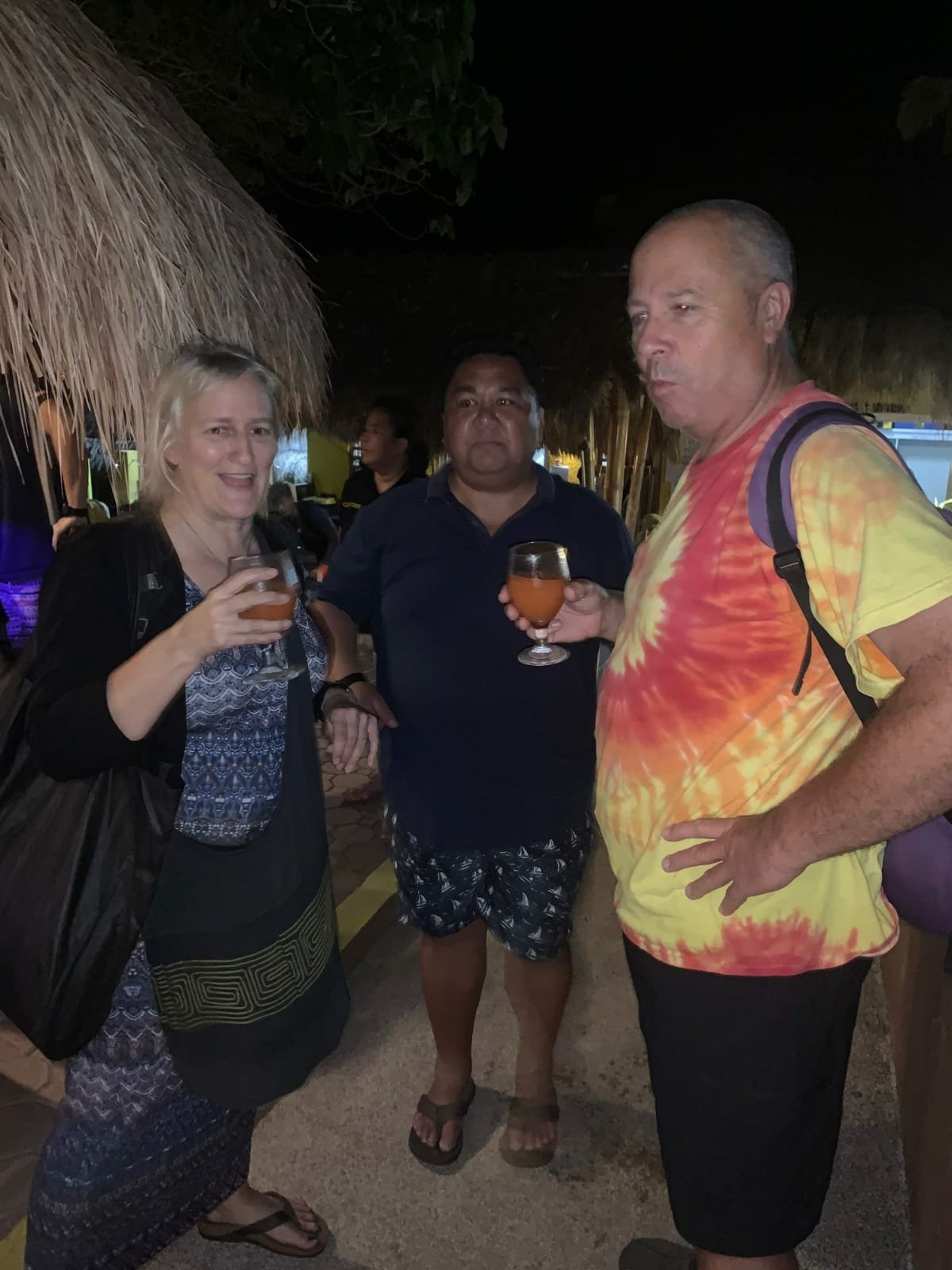 Turns out Darryl wanted to surprise us like we surprised them last year. His surprise was to get us stopped by the police, and put in the back of the cop car where he would be.

Just a smidge pleased that he wasn’t able to sort this out!!

Day finished by tea (oh, the coleslaw here is amazing), a little camera work, a Red Horse and some blogging.

Tomorrow? Breakfast at half six and first dive at eight.